One early morning in November, 49-year-old Larry McQuilliams walked throughout downtown Austin, TX with AK and .22-caliber-type rifles, firing more than 100 rounds at different buildings. Previously, in 1992, McQuilliams had robbed an armored car, which he spent 7 years in prison for.

On the November day, McQuilliams parked his rental van in downtown Austin and began walking around town firing shots at BB&T bank and a federal courthouse before working his way to the Mexican consulate and the police station.

As he made his way to the Austin Police Department headquarters, Sgt. Adam Johnson shot McQuilliams from 312 feet away—while holding onto the reigns of two horses. In other words, Sgt. Johnson stopped the threat from roughly 100 yards away while holding onto two horses and firing one handed.

According to the Austin Police Department, the Sgt. was stabling horses from a mounted patrol when he heard the shots being fired by McQuilliams and drew his service pistol. Sgt. Johnson fired one round from his Smith & Wesson M&P, striking McQuilliams in the chest, killing him.

The fact is, Sgt. Johnson was outgunned and fired one shot that required incredible precision and accuracy.

Unfortunately, with the emerging threats we face in society you could potentially be faced with a situation where you have to make a precise shot under extreme stress, which is why I want to share with you a great shooting drill to make you a better shooter.

The drill is called the Dot Torture and this is a marksmanship drill that came from a fellow named David Blinder and was made popular by Todd Louis Green.

The target used for the drill can be seen below. 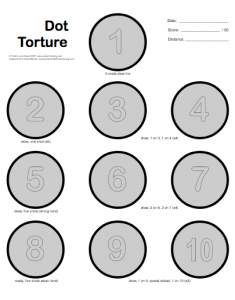 There are 7 stages to this drill and here is a breakdown of how this drill works and the instructions you should follow to help improve your accuracy.

The first time you do this drill I recommend starting at a distance of 3 yards. I realize this may sound easy, but once you score well at 3 yards then you can increase your distance.

Like I said, this is a perfect drill for improving your shooting skills and the way it’s structured it brings different elements and challenges into your shooting.

I pray neither you or I ever have to take a 100-yard shot with a pistol, but anything can happen in today’s society.