Last year, an Orem, Utah man heard a strange noise outside his bathroom window and immediately went outside to investigate. The homeowner was shocked to see a drone hovering outside his window.

Once the drone started to fly away, the man followed it until it landed in a nearby parking lot, at which point, he picked up the drone and took it home.

According to a search warrant, “The citizen who located the drone was familiar with drones and had a similar one himself.” Once the man took the drone home he was able to look at video the drone at captured, which included multiple videos taken through windows of residents inside their homes.

What’s more, some of the video recordings were taken through windows from multilevel apartment complexes.

Included in all of these videos was footage of the drone operator and most importantly, video of his vehicle including his license plate. The person who originally found the drone turned over everything to the Orem Police who were easily able to trace the license plate to the owner of the drone.

Aaron Dennis Foote, 39, and Terisha Lee Norviel, 34, were charged in 4th District Court with voyeurism by electronic equipment, a class A misdemeanor. However, this isn’t Foote’s first run in with the law as he has been charged several times with burglary and theft, according to state court records.

In addition, in the past, he’s been charged with domestic violence and in 2007, he was charged with voyeurism for an alleged incident at a tanning salon.

Clearly, this “piece of work” decided to use a drone to carry out his crimes on unsuspecting victims who believed they were safe inside their own homes. The reality is, as drones become more common, criminals will use them to carry out their crimes.

Whether it’s spying on someone or delivering drugs, criminals are constantly looking at technology in hopes of getting away with their acts. Considering that more and more drones are being used by the public every day, I want to share with you a few different countermeasures that you can use to help keep your family protected.

Shut everything down. If you notice a drone outside your home or if your security cameras catch sight of one, the first thing you should do is shut down all your electronics. This should include your computers, tablets, and most importantly, your internet Wi-Fi.

These days, hackers love to use drones to steal personal information from your home and it’s easy for a drone to connect to your Wi-Fi and gain access to your personal electronics.

Fog, smoke, or nets. All types of countermeasures such as smoke bombs, fog bombs, and net guns have been used to bring down drones. While I fully support these means to stop a drone, these are obviously easier said than done.

However, if a drone is hovering around your home and won’t leave, you may have the time to use one of these methods. In addition to obstructing the visibility of the drone operator, another option is a net that is shot from a shotgun round. The 12 Gauge Skynet Drone Defense round is an example of a shotgun round that can be used to bring down a drone.

Follow the drone. As mentioned in the story above, if you are able to follow the drone back to the source you can help law enforcement track the perpetrator down. Just be careful because you don’t know how crazy or what weapons the person has.

Lastly, you may be wondering why I didn’t mention the different signal jammers that you’ve probably seen online. The fact is, these jammers are illegal in most states because they can interfere with the signals of emergency personal. 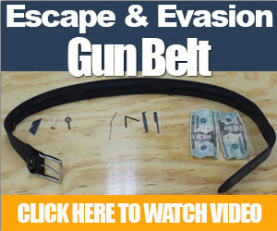