When it comes to residential security, one of the best (and often overlooked) ways to prevent a break-in is by having observant neighbors. If you have one of those neighbors who is always looking out their front window, this can be an excellent deterrent for a criminal who is casing your home.

Earlier this year, Micah Perkins was at home when he felt something was wrong at his neighbor’s house. According to Perkins, “I didn’t really think about it, I just had it, and it was the perfect opportunity.” What Perkins was talking about was his drone.

Perkins lives in rural Seminole County, Oklahoma, where you have to drive down a dirt road to get to his house — and his neighbors’ homes aren’t exactly right next door. When Perkins suspected something was amiss, he knew he needed to investigate quickly without putting himself in danger.

He launched his drone and flew it along the dirt road near his neighbor’s home. On the video feed, Perkins spotted a strange woman standing outside of a truck talking to a male accomplice who was sitting in the vehicle. When the duo spotted the drone, the man sped off, leaving the woman behind.

Perkins said the woman stared right into the drone with the look of “a deer caught in the headlights.” Unfortunately, she took off running before police arrived. But thanks to the video footage provided by Perkins, the police were able to identify the suspect as Marissa Ramsey — who had multiple warrants for her arrest.

Obviously, a drone isn’t going to physically stop people from committing crimes. But, as in this case, it can definitely scare them off or help police identify the potential perpetrators.

That being said, there are a ton of options when it comes to drones. Your choice depends on your budget and the features you desire. For my money, here are the top three drones I recommend for security purposes.

When you think of drones, you probably picture something like this: 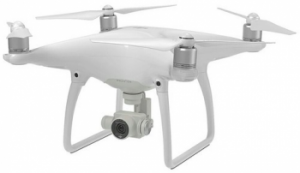 However, the Parrot Disco is a fixed-wing drone. It looks more like a little airplane than the type of drone with multiple propellers most people are used to seeing.

This model can fly up to 50 mph. It can stay airborne for up to 45 minutes, making for one of the longest flight times of any drone on the market.

The Disco comes equipped with an HD camera mounted on a three-axis stabilization system. Plus, it has about 32GB of internal memory so you’ll be able to fly it all around your property to look for any trouble.

The only drawback to the Parrot Disco is that since it has a fixed wing, it does require 240 feet to take off and land. In other words, multiple-propeller drones can lift off vertically like a helicopter, but this drone cannot do that. However, it does come with an autopilot feature to assist the user with takeoff and landing.

The Parrot Disco currently sells for $400.

DJI is one of the top manufacturers of drones on the market. They sell drones that are very expensive with every feature imaginable to ones that are more affordable for the everyday user.

The Phantom 3 SE is one of DJI’s more cost-effective offerings. It flies up to 35 mph while providing up to 25 minutes of flight time. The camera captures video in 4K and the lens gives the user a 94-degree field of view.

One of my favorite features of this drone is that it records the GPS location of the launch site. That way, if the connection cuts out or something goes wrong during flight, it will return to where it started.

The Typhoon comes with a three-axis stabilized 12 MP 4K camera, which offers the highest recording quality available on a built-in camera for drones. This product is perfect for shooting professional-level video.

It has a top speed of about 18 mph and a flight time of 25 minutes. This model also comes with a 16GB SD card and an extra rechargeable battery so you can simply change it out and get back to flying. Another nice feature of this drone is that you can easily adjust the picture settings while in flight to ensure you get the best-looking video.

This company isn’t a major player in the drone market, but this particular model provides one of the best-quality camera options, which is why it makes my list.

Remember to check your local, state and federal laws before purchasing or operating a drone. The FAA regularly updates the laws for drones as they become more popular.

The basic rules are that the drone must weigh less than 55 pounds, remain in sight of the operator at all times, have a maximum speed of 100 mph and cannot be operated within five miles of an airport.

Other than that, happy flying!