Home Firearms How Do You Protect Your Guns at Home?

A few months ago, police in Las Vegas, Nevada, released a troubling report…

Three hundred guns were stolen from homes in a period of 40 days.

Obviously, Las Vegas is a big city. But the scary thing is there are 300 more guns in the hands of bad guys who might be willing to use them to commit more crimes. According to Officer Larry Hadfield, “People get their firearms stolen, and the same people that are committing these crimes commit other crimes.”

The sad fact is most people don’t think about locking up their guns until it’s too late. Another factor is that many states (Nevada is one) have no gun registration. So when a firearm is stolen, it’s difficult to track or verify if it ends up being used in a crime.

As gun owners, we are responsible for our firearms whether they are on our person or stored in our home. I’m a big fan of home security systems that include cameras and other layers of added protection.

But here are some more specific things you can do to protect your firearms — in addition to the security measures you should already have in place for your home:

This type of safe typically uses RFID or similar technology to open quickly when you need to access your firearm. They can be opened with biometric technology, a card, bracelet or key fob and are a great way to keep others from getting to your guns.

To keep a criminal from walking off with the safe, secure it with a cable that runs down the back of your nightstand and is fastened to a large piece of furniture. Even if a criminal goes straight to your nightstand, they won’t be able to take the safe with them because the safe is anchored and the cable can’t be cut.

You might think this is obvious. However, there are several factors to consider when it comes to gun safes — I can assure you all gun safes are not created equal. Plus, a gun safe is something you don’t want to go cheap on because it’s so important.

A large, quality safe will run you a few thousand dollars. A large safe will be difficult to move unless you have the right equipment and a number of people to lift it. The majority of criminals won’t even try to move a massive safe.

In addition to being heavy, safes of this caliber are very secure. They are extremely difficult to break into — unlike what you see in the movies.

Generally, most thieves who break into a home want to grab as many valuables as they can and quickly leave. They won’t spend hours trying to crack a large gun safe. Safes made by Winchester and Liberty are great options.

This might seem like another obvious choice for secure firearm storage, but the fact is wall safes are a perfect way to store guns because they are easily concealed. You could install a wall safe behind a picture, mirror, clock — basically anything you can hang on your wall.

Even if a criminal uncovers your wall safe, they most likely won’t have the time or tools to pry it out. One wall safe I recommend checking out is made by Console Vault. Their Wall Vault sells for around $270.

These days, more and more companies are selling furniture with hidden compartments for firearms — beds, dressers, bookcases, clocks and more. In my opinion, this isn’t the most secure way to store firearms, but it is an option many people prefer.

One reputable company that makes this type of furniture is called Tactical Walls. This company sells everything from tables to clocks to lamps to stash concealed firearms. Most of their products utilize RFID technology to open the storage compartment which keeps your guns instantly accessible in an emergency. 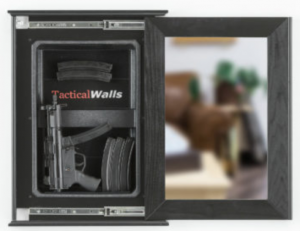 Like I said, this isn’t necessarily the most secure way to store firearms, but I know many people would rather have an extra piece of furniture in their home instead of a massive safe. Plus, how many street criminals are smart enough to recognize a piece of furniture designed to store a gun and then be able to figure out how to open it?

Ultimately, the best thing you can do to lower the chances of your firearms being stolen is to have multiple layers of home security including an alarm system, cameras, a dog AND a safe. If you have children or grandchildren, please take the extra steps to ensure all guns in your home are secure and inaccessible to kids.

Even if you live alone, I highly suggest using some type of safe or hidden storage area for your firearms. If you have a plumber or an electrician in your home, you don’t want them to see guns lying around. Even if they’re honest, you never know who they’ll share that information with.