A few years ago, Louis Jordan set out for the Gulf Stream off the South Carolina coast in his 35-foot sailboat. Somewhere in the Atlantic Ocean, Jordan encountered rough seas that caused his boat to capsize. In the process, he severely injured his shoulder.

According to Jordan, “Everything I owned got broken — all my electronics, my GPS devices.” In other words, he was dead in the water with no way to fix his boat or contact anyone for help.

Plenty of Fish in the Sea

As his food and water ran out, Jordan realized he was going to have to figure out a way to survive. When it rained, he used a bucket to collect rainwater for drinking, but finding food was a little more difficult.

However, one day when he was rinsing out his clothes in the ocean, he noticed the fish seemed to be attracted to his clothing. So Jordan decided to hang his clothes overboard as bait and use a small net to pluck fish from the ocean.

Jordan drifted at sea for over two months. Until one day he was picked up by a German container ship roughly 200 miles off the coast of North Carolina.

Throughout this ordeal, Louis Jordan demonstrated an incredible will to survive. He did whatever he needed to do to find food and water to stay alive. In fact, after he was rescued and transported to a hospital in Norfolk, Virginia, Jordan was able to walk into the hospital under his own power — even after everything he had been through.

Considering this, I want to share with you some thoughts on hunting, trapping and fishing in survival situations.

When it comes to hunting for food in a survival situation, there is a common misconception that you should target large game such as deer. The problem is these animals are far more difficult to find and kill compared with smaller animals.

The best food source for survival is usually small game such as squirrel, rabbit, chipmunk, beaver, mouse and raccoon. A rifle is the best option for a hunting firearm (I prefer a .22) because it can take down small game cleanly and effectively. The last thing you want is to eat a rabbit full of buckshot.

Small animals like squirrels tend to gather at the base of large trees, while rabbits are usually found in more open fields. Typically, small game is more active in the early morning and early evening hours. And they tend to stick to areas with dense leaves or cover so they can hide.

The biggest drawback to hunting in a survival situation is that it takes a lot of time and energy, which isn’t something you want to waste. 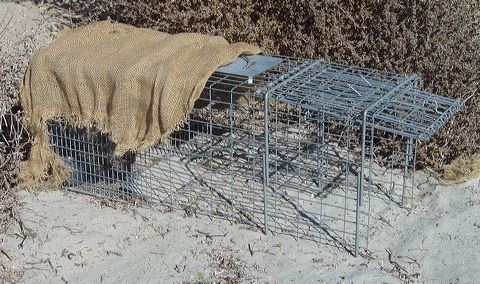 Trapping is not as time-consuming as hunting and will take less effort on your part. Just like with hunting, I recommend focusing on small animals. In a survival situation, you shouldn’t worry about setting some huge bear trap.

One trap that I recommend is the Duke No. 110 Magnum body trap, which sells for around $12 on Amazon. It’s small enough that you can easily carry it with you and it should kill a small animal instantly. Of course, you can also build your own snare or deadfall trap, but this is a good premade option to consider.

When it comes to trapping, make sure to check your local laws before testing out any traps. Depending on where you live, you may be required to have a license or permit to trap animals.

Fishing is one of the best options for food if you are near water. The majority of fish are edible and full of nutrition. The most important thing to remember about fishing is don’t focus on the size of the fish. Smaller fish are more abundant and usually easier to catch.

Adding fishing poles and hooks to your survival gear is a great idea — especially since they don’t take up much space. As far as fishing line, you can improvise with the gear you have.

Making a spear is another effective way to catch fish. Since you can make a spear out of pretty much anything, it’s also one of the easiest ways to fish for food in a survival situation.

Remember — in a survival situation your body will be under extreme stress. You will probably consume less food than you are typically used to eating.

Also, keep in mind that humans can go without food for much longer than without water. Be careful not to waste too much energy searching for food when it may be best to stay put and trap or fish.