Last month, Charlotte Simons, a 74-year-old woman from Tigard, Oregon, was wrapping up the mundane task of paying her bills. But when she asked her roommate for his share of the electric bill, she had no idea she would be in for the fight of her life.

Charlotte was sitting in her reclining chair when she asked 72-year-old Leo Miller for the money. Without warning, Miller came at her with a plastic bag, covered her face and tried to suffocate her.

As Charlotte struggled to breathe, she decided to play dead in the hopes that her attacker would stop. After she went limp, Charlotte was able to push the button on her medical alert necklace and tell the operator to send the police.

Once Miller realized that Charlotte was still alive, he began punching her in the face. Until the cavalry arrived, Charlotte had no choice but to fight back.

Luckily, her survival instinct kicked in. Charlotte said, “That’s when I reached for his gonads, and I just squeezed them as hard as I could. If I had a pair of cutters, he wouldn’t be wearing ’em today, he’d be at the hospital.”

Stand Up for Yourself

It sounds like Miller was probably in better physical shape than Charlotte since he was successful in overpowering her during the attack. Of course, once Charlotte grabbed Miller in a sensitive area, the attack was derailed long enough for police to arrive and arrest him. He is currently in jail facing attempted murder and assault charges. 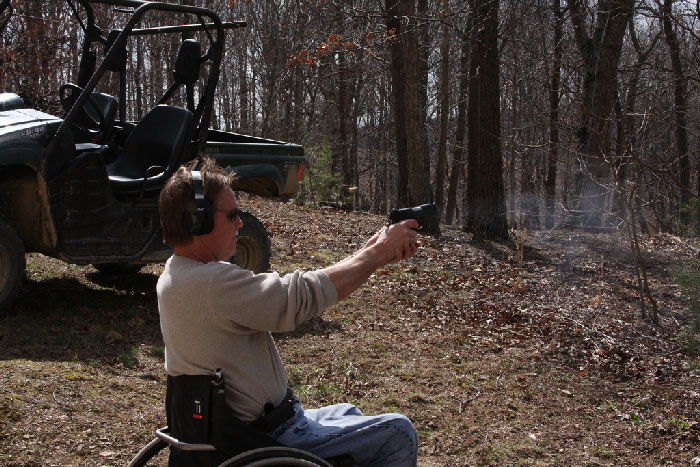 The fact is people with physical limitations are often the victims of violent crimes because criminals tend to prey on those who are weaker and less likely to fight back.

However, even if you are physically limited, there are things you can do to defend yourself. Here are five tips that can help keep you safe no matter your physical condition:

Preparation is vital to personal protection as you grow older and become less mobile. Just because you have limited abilities, you shouldn’t have to live in fear of being targeted.

These tips will help you stay safe even when you leave your home and are more vulnerable. When you are honest with yourself and realistic about your capabilities, you can make the proper adjustments and be ready to defend yourself.