Home medical Could Acid Attacks Be Our New Biggest Threat?

Criminals, terrorists, and gangs now have a new deadly weapon in their arsenals: acid attacks.

Sometimes called “face melting” or “torture in a bottle,” acid attacks can cause immediate, intense pain the moment the makes contact. They can also cause massive, irreversible damage to a victim in mere seconds.

Criminals love this weapon because it’s easy to get and it’s not illegal to carry around. The bleach, ammonia, industrial oven cleaners and industrial drain cleaners used in most acid attacks can be bought for a few bucks at the grocery store. 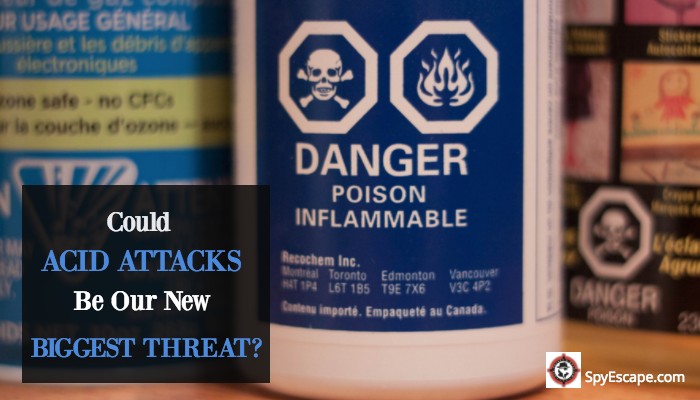 What’s more, acid attacks are extremely easy to conceal and quick to deploy. A plastic bottle filled with acid and a little water and these criminals are ready to wreak massive havoc.

Most times, attackers will run up (or ride up) to victims, spray them down with the acid and then take off. And because these attacks are usually aimed at the exposed skin of the face and upper torso, the effects are nearly instant, potentially resulting in:

And numbness from destroyed nerve endings.

That’s to say nothing of the deep mental pain and anguish acid attack victims suffer. Many victims say there is never any real closure for them, the attack completely changes their identity and they’re “not the same person” anymore.

How to Survive an Acid Attack

For years, victims of acid attacks have been almost exclusively female (80% of global acid attack victims each year are women). But as vicious criminals and street gangs have adopted this weapon, their targets in these attacks are predominantly males.

In the U.K. alone, where acid attacks have skyrocketed 74% in just a year, male victims outnumber female victims two to one. Believe it or not, London is the world leader in acid attacks, which could be the “canary in the coal mine” for an uptick in copycat assaults here in the U.S.

So what can you do to prevent yourself from becoming a victim of an acid attack?

Vigilance and awareness are key.

When you’re traveling, perform a simple online search to find out if acid attacks are common to your destination. If so, maybe think about changing plans, or at least avoiding the parts of town where these attacks occur.

When out and about, make sure you’re aware of what’s going on around you. If someone you don’t know is running or riding up alongside you, get as far away from them as fast as you can. Try to put solid objects between you and the potential attacker to block any flying acid.

In crowds, keep to the farthest edge away from the street. This will keep a buffer of people between you and a potential attacker and give you the best chance to avoid being hit with acid.

Now, if you (or someone near you) is attacked, here’s how to survive…

If the pain and burning sensation subsides before help arrives (this usually takes 30–45 minutes), don’t apply any cream to the burns. This will affect the efficacy of treatment from trained medics. Do wrap the wound loosely in sterilized gauze, if available, to prevent contamination.

The bottom line: Your best bet is to avoid places where acid attacks happen, even if it means changing your route or plans. But if you do end up the victim of an acid attack, you now know exactly what to do to survive.