During one of the lunch brakes in the Institute I’m working in, a good friend and a colleague of mine gave me a whole new perspective on personality and behavior of violence victims. He was the head of prison hospital in Belgrade for eight years- the biggest health facility of that type in Serbia. After spending almost entire career literally in prison, he decided to wait for retirement in a more peaceful and less stressful environment- the Insitute. I was asking him whether or not there were torture cases among political prisoners in ex Yugoslavia. Of course, he just shifted the discussion in different, equally interesting direction- violence in general.

“Aleksandar, violence victims won’t tell you what exactly happened because they are, one, scared of consequences, and two, feel embarrassed and humiliated to talk about it. Sometimes you can assume that something happened only by the presence of defensive wounds. Quite often, you won’t see any defensive injuries- they just let the aggressor beat them.“

The violence is everywhere- domestic violence, bullying victims, and gender violence are just some of the most common forms. Although triggered by different motives, all have one thing in common- wounds.

IMPORTANT: The mere presence of defensive wounds does not automatically prove violent act or qualify a person carrying them as a victim. Sometimes they can be acquired during sports activities or during an accidental trauma. Defensive wounds should be considered only as a piece of a puzzle- nothing more. Black- eyes can be caused by tooth extraction, for example! Keep in mind that 52% of kids who are walking have bruisers (The Royal Children’s Hospital Melbourne study)! Just like you don’t judge a book by its cover- you don’t judge violence only by defensive wounds.

One of my favorite mentors in college, forensic medicine professor Dusan Dunjic (now unfortunately deceased), whose expertise helped clarify some of the cruelest crimes during ex-Yugoslavia wars, once told me:

“As I prepared the cases for processes in the International Criminal Tribunal for the former Yugoslavia, I noticed that victims spoke about the violence silently, staring to the ground in front of them, covering mouth with their hands while talking. They were ashamed of being victims!“ 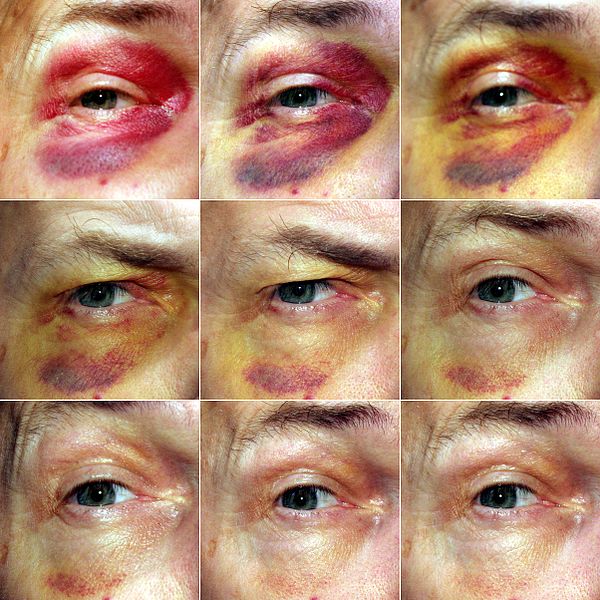 Those are the injuries a victim takes during the attack. Depending on the weapon and location, they may appear as bone fracture, cuts, contusions or bruisers (this is not the classification forensic medicine experts use- It’s a bit narrowed down, but more than enough to understand the topic).

Non-accidental injuries (violence) has a pattern (often). Typically, there is more than one wound and they tend to group (in cases of beating aggressor punches the victim repeatedly in the same body area).

While the “bruise color wheel“ is not the best way to assess the time of infliction, it is a quite useful tool to assess if bruises were inflicted simultaneously (one violent incident) or on multiple occasions (repeating violent incidents). The picture above depicts the black- eye healing process over the course of nine days. Oh, this one was caused by a wisdom tooth extraction.

Although sometimes sharp weapons are used, blunt trauma is way more common. Most often, the “weapons” are bare hands (slapping, punching or pinching).

Location of the injuries

Typical location: forearms (lifting hands up to wear off the attacks and protect the head). When thrown to the ground, victim instinctively takes the fetal position to protect the abdomen and face. The victim protects the head by placing hands on it, exposing the back that way.

Bruisers are the most common finding in cases of violence. Their appearance may suggest the mechanism of infliction.

These appear as linear bruises in pairs, parallel to each other with the skin between that appear relatively intact. Tramline bruises are caused by extremely strong strikes with a round or rectangular object (pole, baton, belt, buckle, etc.).
Extremely strong slapping can cause a tramline bruise- in some cases, bruise is a hand imprint

Just like their name says- they are linear. Usually, there is more than one (whipping). Slapping and beating with a thinner pole or baton is the most common mechanism of infliction.

The mechanism of infliction is a grab and/or squeeze. They appear as a small, oval-shaped bruises. Most often, there are a few smaller ones and one bigger (a thumb). Due to an uneven pressure, not all fingers leave a bruise. Typical localization is the upper arm or upper torso/neck area (chocking). Sometimes they are symmetrical- present on both upper arms (grabbing a person with both hands) or across the upper torso and neck in cases of choking.
Love bites (hickeys) sometimes can look like fingertip bruising.

Sometimes referred to as “butterfly bruise,“ these consist of two oval bruises next to each other. One bruise is typically bigger (inflicted by a thumb) than the other. Thinner skin that bruises easier is a typical localization of the injuries (the inner portion of the upper arms, for example). One isolated pinch should be suspicious, but multiple, present on both hands and in different stages of discoloration suggest a constant infliction.

Protecting your family doesn’t always mean stopping a guy with a gun.  It may be stopping domestic violence or child abuse. You should know to ask your kid or grandkid with tramline bruise on his/her thigh or upper arm “Did something happen? How did you get this?“ and carefully analyze the situation, facial expression, and the explanation. You should also discreetly look for any other bruises on the visible parts of the skin because a tramline bruise does not appear out of nowhere!

According to the National Center for Educational Statistics, roughly 20% of students report being bullied. One-third of them report being bullied at least once or twice a month. Approximately 5% are victims of physical violence. These numbers sound bad? The real drama hides behind domestic violence and child abuse numbers!