Diseases transmitted to humans by a tick bite are known as tick-borne diseases, and in this post, we will dive into the story about those.

Everybody heard of a Lyme disease. It got its name from a city of Lyme, and its neighboring city Old Lyme in the US (Connecticut), where the causing bacteria was isolated for the first time. Tick-borne disease.

Rocky Mountain spotted fever- another Americana! Tick-borne disease. The patients with a severe form of the disease had a characteristic, black skin patches (due to a bleeding into the skin, which often meant approaching death). That’s why the condition was known as “black measles”. 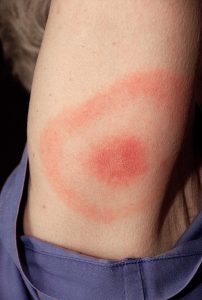 But the list doesn’t end there. According to the CDC, 16 infective organisms in the US can be transmitted to humans by a tick bite (and cause a disease).

All of them are treatable nowadays with another Americana. Antibiotic Doxycycline was developed in the Pfizer company (the US pharmaceutical company). It is used as a standard treatment for tick-borne diseases. As a doctor (and an Europian) all I can say is- thank you for the Doxycycline, USA! And for the jazz, of course.
Complicated and life-threatening forms of a disease are rare today (and not expected in individuals with good overall health).

Tick bites are seasonal. Not all species are active throughout the whole season. For example, black-legged ticks are active in the late summer/ early fall. However, we need to prevent or treat all bites and all tick-borne diseases, so keep in mind that the bite season stretches from the early summer to the fall (before the temperature drops in late September or early October). Not all ticks pass the diseases, only carriers of the infective agent (depending on the disease, up to 45% of tick population in the US are carriers).

Be aware of the risk!

Although tick-borne diseases are easy to treat, establishing the prompt diagnosis is crucial. No timely diagnosis- no easy treatment; as simple as that! A bite can happen everywhere and anytime during their season.

If you get flu-like symptoms during tick bite season, before showing up at doctors office try to remember if you got bitten by a tick one day to 6 weeks earlier (that is an incubation period span for tick-borne diseases). Most people cannot recall the bite, and that’s fine. But if you recall a bite, tell your doctor, it will help- a lot!

I had a patient who didn’t know he got bitten. The tick attached, sucked his blood for a few days, detached and that’s it. Sometime later, he got shivers, muscle pain and headache (flu-like symptoms) and came to my office. The only unusual thing- you don’t see flu-like symptoms every day during summer. Not a typical case of a cold, but not something doctors go crazy about.

I asked him to take off his shirt; just I could listen to his lungs. And there it was- a 5-inch Bullseye (erythema migrans) in the middle of his back! That is a sign of Lyme disease.

But! Not all patients with Lyme disease develop Bullseye. And not all tick-borne diseases have this symptom. It is a pathognomonic sign of Lyme disease (it means it appears ONLY in Lyme disease; seeing it confirms the diagnosis with 100% certainty). If the patient didn’t have Bullseye on his back, I would never think of tick-borne disease. But it would ring a bell if he said something like “Two weeks ago I noticed a tick in my bellybutton and my wife removed it.”

The treatment of a bite is simple; you need to remove it (safely!).

If you don’t own a removal tool like this one (click here), use the fine point tweezers. Let’s assume you don’t own a removal tool (which is easy to use). Firmly grab the tick close to the skin and pull. Apply even pressure. When it detaches inspect if some of its parts stayed in the skin. If yes, remove them. In case you can’t do it without damaging the skin further, let the wound heal. After removal, rub the wound with alcohol or just wash it with soap and water. Keep the tick, so your doctor can determine the species and make a better decision about further treatment.

What NOT to do?

Do not rub the tick with alcohol, nail polish, oil or some other substance that should “make it fall off on its own“ These tricks are not reliable and sometimes result in breaking off parts of the tick which stay “trapped“ in the skin (increasing the risk of disease transmission that way).

One last tip, and you can call yourself a tick-borne disease prevention expert

Around the attachment spot, round redness of the skin may appear. If it developed within the first 48h after the tick attached and smaller than 2 inches in diameter, the chances are it is an allergic reaction to a bite. So, don’t panic, it’s not a Lyme disease, just an allergic reaction (a common finding).