Home Educational A Buttload Of Cellulitis

If you’ve never heard of cellulitis, I’m not surprised.  The Mayo Clinic calls it a “…common, potentially serious bacterial skin infection.”  However, I’ve only ever seen it on a handful of people.  In fact, I’m the only person I have ever seen it on outside of Ranger School.  It’s considered to be common in Ranger School because, for months, you spend a significant amount of time “taking a knee” to pull security.

It’s very common to take a knee on sharp or rough objects, especially at night.  These conditions greatly increase your chances of bacteria entering your skin and causing an infection.  I’ll leave it to the doc to explain more, but you might find it interesting to know that I actually got cellulitis on my right butt cheek.

It’ll all started back in September of 2001.

Just days before the terrorist attacks on NYC.  My unit was conducting an MRE (Mission Readiness Exercise) in preparation for our upcoming deployment to Kosovo.  The MRE was designed to simulate the real world missions we would be conducting in theater, especially those we were not regularly trained for.

Because this was a peacekeeping mission, that meant a whole pile of non-combat related tasks.  Instead of laying in the prone shooting bad guys, we were practicing having tea with local officials.  And instead of raiding villages, we were sitting around fire pits trying to collect information from the locals.

Needless to say, there was a lot of sitting around.  And I got the distinct pleasure of being probably the only person ever to have gotten cellulitis on their butt.  Generally, cellulitis would be one of those respectable injuries.  It’s something that indicates that you’ve been making sacrifices to complete your mission.  In this case, it was just funny.  It was so ridiculous that my platoon medic refused to even look at it.

There’s no way you could get cellulitis on your ***!

For three days straight, I reported to my platoon medic that the condition was getting worse.  And for three days he refused to look, assuming that it must be some sort of a joke.  On the third day, I could hardly walk.  The medic finally agreed to recommend that I see the PA (Physician Assitant) without ever taking a look.  He assumed that I would drop the joke rather than be caught lying about it to the PA.

Once I arrived at the Battalion Aid Station, the jokes continued.

The PA, Lt. Pataky (I normally don’t give real names here, but this guy has earned it), decided to use my bad condition as a learning opportunity for his medics.  Once he had started an IV with steroids, I dropped my trousers and laid down on the table.  The room filled with medics and Pataky began explaining the situation.

A critical component in evaluating symptoms is marking the affected area.  Pataky had informed me that he was going to monitor me for 12 hours before deciding if he needed to medivac me.  So it came as no surprise when the first thing he did was draw a big circle around the affected area.

I was a little surprised, however, when the other points he marked drew audible giggles from what, I was now realizing, was a room full of female medics.  I guess I should have expected the female medics as all of the male medics would have been out in the field with us.  What I didn’t expect was the giant smiley face my swollen, painful, pus-covered, butt cheek.

This wasn’t my first time dealing with Pataky, so I shouldn’t have been surprised.  He was a fantastic PA, but always had jokes.

While looking for some interesting data that I could use for the article, this study popped. It was about US military personnel aged 18–40 years and estimated a cellulitis incidence rate of 0.2/1000 person-years among active-duty service members between 1 January 1998 and 31 December 2001. [1]

It means that 0.2 of 1000 soldiers (1 in 5000) within the time span of one year gets cellulitis. It’s not a lot. The funny part- Jason’s butt got into this study. So, without an unfortunate case of Jason’s rear, the incidence rate of cellulitis would be even closer to zero among military personnel.

Skin infections are common (from taking a knee) among military personnel, but I guess with adequate care, those get under control long before cellulitis establishes.

Cellulitis is an infection that affects the skin and subcutaneous tissue.

All patients complain of tender skin, tingling sensation, pain, swelling and the sense of heat in the affected area. Regional lymph nodes may swell and get painful (regional lymph nodes of the legs are in the groin area and of the arms in the armpits).

The best descriptions of diseases and symptoms come from the patients (not doctors). For example, the most vivid descriptions of the “aura” that announces incoming epilepsy attack can be found in a novel The Idiot written by a famous Russian writer Dostoyevsky who suffered epilepsy.

Unfortunately, Dostoyevsky didn’t suffer cellulitis, so the best we got now is “…my swollen, painful, pus-covered, butt cheek.”

Jason gave us an accurate description of cellulitis.

The typical localization is lower extremities. Skinfold beneath breasts in women (and some men) are also usual localizations. The condition may be excruciating.

Is it as serious as the Mayo Clinic claims?

In people with chronic lower limbs edema (heart disease, obesity, elderly, diabetics, etc.) it can grow into a severe, life-threatening infection. Healthy adults (like Jason in 2001) are not prone to a complicated disease.

Ok, another thing I have to say (related to the butt joke): The disease is not a joke. Any health issue, if the circumstances are right, can turn into a life-threatening condition. If someone took care of Jason the first time he asked for help, the ingrown hair, laceration or a zit wouldn’t turn into cellulitis.

How to prevent cellulitis?

The function of skin is to defend the body against outer world. As soon as the barrier damages, bacteria, viruses, fungi, and parasites from the outer world have an open route for infection.

I remember what an old surgery professor taught us in college: Cellulitis always begins as trauma. It may be an ulcer, ingrown hair, laceration or microtrauma not visible to the naked eye, but there’s always something that opened the door to subcutaneous tissue. Look close to the picture above, you will notice a patch on a left toe. There is always something that opens the door!

Keep the skin clean. A mild soap and water are all it takes to prevent a majority of skin infections.

Take care of all visible injuries (if you are in remote areas where medical help is not available). By take care, I mean keep them clean! If nothing else is available, wash them with water and mild soap few times a day.

If you got a tattoo or had waxing, be careful not to contaminate the wounds (both procedures are quite traumatic to the skin). Tattoo and depilation open the skin for infections until it heals in 48-72h. 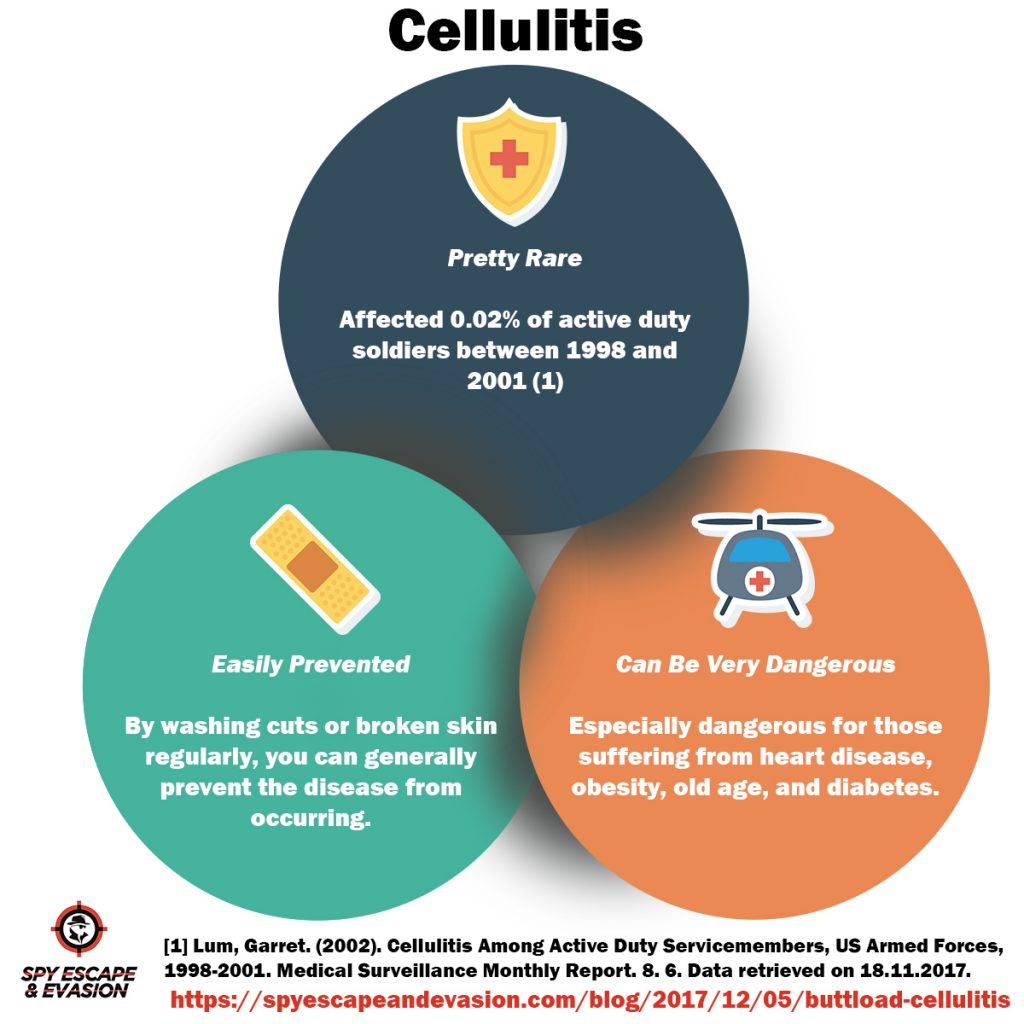 How to treat cellulitis?

Antibiotic therapy is necessary for almost all patients and usually, the symptoms do not subside before antibiotic treatment starts.

Keep the affected part of the body above the level of the heart. It will reduce the swelling. Not applicable in case of infected butt cheek.

“Keep it clean principle” applies, but with one important note: DO NOT RUB the skin after washing, pat to dry (or leave to dry in open air).

If cooling brings the relief, you can apply cold water to the affected area (cold, not freezing!).

Draw the borders of an infection. It will help you decide if the disease spreads and how fast does it spread.

When to ask for professional medical help without delay?