I’ve been a sworn LEO (that’s law enforcement officer for those not in the know) for the past seventeen years. I’ve learned in that time that everyone knows how to do my job better than I can. And they have no compunction about letting me know this. So, one thing I hate doing is second-guessing cops who got hurt or killed doing their jobs. Or those who have failed to perform their jobs adequately, fully on display for us to gawk at in cyberspace. But what I hate more is failing to learn from those mistakes. Like the guy said, “a smart man learns from his mistakes; a wise man learns from the mistakes of others”.

I was recently approached by a retired officer who is a SORA registered security professional.

Let me back up a little bit and explain SORA. SORA is the Security Officers Registration Act. Its function is to codify and govern how private security is done in the state of New Jersey. Its goal is to ensure that security officers are trained professionals as opposed to allowing, say the New Jersey Motor Vehicle Commission to hire Hell’s Angels at the DMV and have a Rolling Stones/Altamont incident at the end of every month when the lines wrap around the building.

He explained to me that he had heard talk about some type of mandate on holsters following an incident involving an armed security professional. From what I was told it sounds like it’s an incident in Jersey City, NJ. In this incident, the armed security officer was overpowered by a thug and his weapon was taken from him. One of the responding police officers was shot and killed with the security guard’s weapon.

The thought was why not use a triple retention holster? Put your gun in that and you’re good. Whether or not this was official or just rumor I don’t know. But it got me thinking. 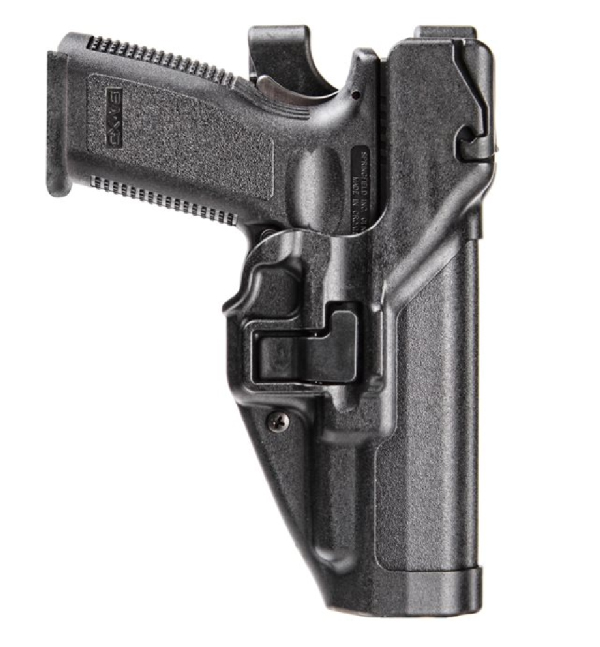 Here’s where I have, and any other gun carrying person should have, a problem. Weapon retention is the responsibility of the person carrying the weapon, not the holster. Does the holster play a part? Of course, it does. That’s why we responsible shooters carry weapons in holsters, not pockets or waistbands. But to mandate a licensed security officer to wear a specific holster with no obligation to learn how to protect themselves or that weapon? I see that as myopic at best and irresponsible at worst.

My thing is this- I just can’t see some jughead grabbing my gun strapped to my waist and me standing by and looking at him feeling confident that the battle is won because I’m strapped in with triple retention and he ain’t breakin’ through unless he’s from Krypton, Asgard, gamma irradiated, or hopped up on venom.

And I’m not suggesting that SORA thinks that anyone they register won’t defend himself or herself either. These are all responsible professionals. Otherwise, why go through the certification process in the first place? But how about some direction? And again, I haven’t looked into this further. Maybe they have. But it did get me thinking about weapon retention and here we are.

At what point does it end? I shave with a single blade safety razor even though Mach 5’s are out there. No, I’m not hopelessly old school. Triple retention is fine. Get the reps in on breaking leather and doing a smooth presentation and you’ll be good to go.

But that’s just the beginning. Remember what I said about standing by and watching as your holster does the work? That can’t happen. So- what?

I come from a Jeet Kune Do background, Bruce Lee’s fighting philosophy. He really had it switched on when he put it all together and I use the JKD principles as sort of a litmus test.

One of the things he said was that simplicity is the result of profound thought. So, with that said I sat down and tried to come up with what I believe to be the simplest advice that I could give in the subject. Also, these are just concepts, not tactics. Like the proverb states: If I give you a fish I feed you today, if I teach you to fish, I feed you for a lifetime. I can’t account for, nor can you, each and every scenario there ever will be, but with these generalized concepts backing you up you can be more prepared.

Easy enough, right? Anyone who is armed should be practicing this concept anyway. We can look back on Col. Jeff Cooper’s color code system here and by way of a quick review it goes like this:

White: completely unaware. This is where the bulk of our population is. Just going about their everyday life assuming all is well and completely oblivious to their surroundings and situations. This is why we have so many great videos of people texting and walking into fountains.

Next up is condition yellow. This is relaxed awareness. You’re not walking around with your hand on your gun, actively scanning everything and everybody. You’ll look like and will be correctly assessed to be a crazy person. But you are switched on to the point that you know that should you need to, you can and will assess a threat should it present itself.

Next: condition orange. This is where condition yellow pays off. Something just isn’t right and you can feel it. You start making adjustments to your situation to try to remedy that threat. There are just too many variables out there for me to say what happens next in any orange situation. But this is a more concerted assessment of a situation. Your mind starts going through solutions to potential problems. If the threat does X I’ll do Y, etc… Now, this is also a jump-off point too. Should the potential threat be deemed a non-threat, we go back to condition yellow. Should the threat be an actual problem we go…

Condition red. The fight is on. And that is a whole new set of problems that one article cannot possibly prepare you for.

As an armed operator of any sort, you should be in condition yellow. You should be cognizant of where you are, who’s around you, and be devising plans all along the way. With a little practice, the consent assessment of the data stream around you gets easier and you’d be amazed at how much you take in and how much you did not see beforehand.

Start analyzing the tactical advantages of where you position yourself in relation to your environment. Do I sit with my back to the door where I can’t assess the traffic coming in or out or do I sit with my back to a wall where I can see as many avenues of egress as possible? Do I just say, “this is a lot of people” or do I scan the crowd to see who deviates from the baseline norm of that crowd? Do I use a wall urinal and keep my back to numbers of unknowns in a public restroom or do I use a stall, no matter what, or better yet, is there a “family bathroom” where I can be completely alone with a more secure door between me and the unknown threats while I do what needs to be done in there?

It can’t be repeated enough always be aware of what and who is around you and think ahead of what may happen.

Again, with the simplicity. If during concept 1, Situational Awareness, something tripped your radar or one of those questionable characters breached the wire do not stand there and let it happen. You need to make adjustments. If it’s a situation where you can leave, do that. Leave. The best fight is the one you do not have. If you have to stay for whatever reason now is the time to start putting yourself into the best position of tactical advantage. Now is the time to keep your weapon in a position away from the perceived threat as best you can. If you happen to be an on-duty LEO maybe back up is the answer at this moment. Better safe than sorry. Law enforcement is a team sport.

In training recruits at the police academy, there is often a lot of material crammed into a small block of time. And DT is no different. And weapon retention is just one block of that one block of instruction. Unfortunately, we have to work around these time constraints. So- often times we work just from the technical side of gun grabs, meaning: “someone’s hand is one your gun, he means to take it, this is what you do”. I preface that with a reminder that if someone has grabbed his or her gun in a static situation (not in the chaos of a fight), a lot went wrong already. That means that they missed the threat already, they allowed the threat to close the gap, they allowed the threat to actually reach for them and did nothing about it and now they expect that this one technique they learned in the police academy is going to save the day. I do that more so to illustrate the point that training is an ongoing lifelong pursuit and that these are not once learned, never fail magic tricks. The training never stops. Just like you. You never stop. That’s why this article references you standing by and doing nothing while your holster does the work. Absurd, right?

“This fight’s commenced. Get to Fightin’ or get away!”

If you haven’t seen it, do it today. The point to this is also simple. Now’s not the time to wonder if you know some technique or not. Or if it’ll work. Weapon retention techniques and tactics need to happen without thought, just like weapon malfunction drills. More on that in a later article. If you have to analyze and decide then act you’re likely going to be staring down your own gun. Again, I emphasize, this is just from a gun grab. If you are rolling with some miscreant that’s a different story. More on this also, in a later article. What techniques to use? Well, I’ve got some ideas, but that too is another article.

The ideas here that I’m trying to convey are neither new nor revolutionary. But they work. But only if you practice them and make them work. Like that triple retention holster, they won’t work by themselves while you stand by and watch.

It bears repeating: simplicity Is the result of profound thought.