Of course, you know I’m a gun guy. I always carry my firearm wherever I’m legally allowed to do so. However, I realize that not everyone is going to carry a gun like me, which is why I think it’s important to consider other options for self-defense.

I regularly hold escape and evasion training in Las Vegas, Nevada. Earlier this year, I was working with a group of folks on personal safety techniques when we got into a discussion on alternative self-defense weapons.

There was a woman in the group who didn’t want to carry a firearm. She also said she gets off work late at night and sometimes has to walk a fairly long distance to her vehicle, so I suggested carrying a tactical pen or a stun-gun flashlight (click here to see this flashlight).

Later she told me she was so nervous she decided to carry BOTH a tactical pen clipped to her purse AND a stun-gun flashlight with her when walking to her car each night. And it’s a good thing she did…

One night after work, she noticed a strange man following her and got a very bad vibe. As they walked, he got closer and closer and then began talking to her.

She was completely alone — nobody else was around besides this guy. So she whipped around with her stun-gun flashlight in her hand and pushed the stun button, producing a loud zapping sound that froze the would-be attacker in his tracks before he fled. 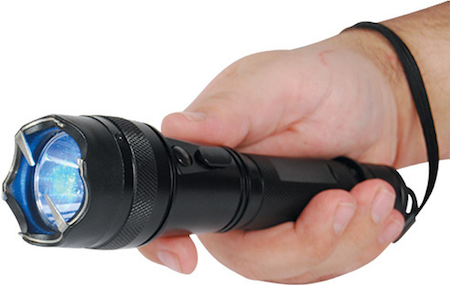 Shaken, but thankful that she chose to be prepared, the woman got to her car and made it home safely.

You will often hear people use the word “Taser” or “stun gun” interchangeably when referring to these devices. However, these are two types of weapons that work in different ways.

Tasers shoot two spear-shaped probes connected to wires and the probes are designed to penetrate clothing up to 2 inches thick. Both prongs must make contact with the target to deliver an electric shock.

These are the weapons police officers typically carry because their range capabilities mean you can deploy it from a safe distance. Most Tasers can shoot between 15–30 feet.

Both Tasers and stun guns are very effective self-defense tools. I strongly encourage you to consider getting one for your personal protection — especially if you aren’t interested in carrying a concealed firearm.

Power That Packs a Punch

If you’ve ever looked into buying a stun gun, you’ve probably noticed that most companies focus on how many volts their product can deliver. The thing is a higher voltage doesn’t mean more power. In fact, any company that claims their stun gun delivers millions of volts isn’t being entirely truthful.

I’m not saying you shouldn’t check the voltage, but the truth is that amperage — not voltage — is what really defines how powerful a stun gun is. A single amp is enough to kill a human, so most stun guns are between 2.5–4 milliamps.

Which begs the question, does voltage matter?

Well, the voltage gives the stun gun the necessary juice for the current to penetrate clothing. With that in mind, I don’t recommend purchasing anything under 300,000 volts because you want to be sure there are enough volts to deliver the amps, which is what will cause pain to the person trying to harm you.

There are hundreds of different versions of stun guns you can buy online. In my opinion, the best type of stun gun is one that doubles as a flashlight. It’s simply more practical.

Flashlight and stun gun combined
Let’s say you work late like the woman I met in Las Vegas, or you walk your dog at night. You can use this multipurpose device to help you see in the dark and as an effective self-defense weapon if you need it.

As I mentioned before, I know some people don’t want to carry a firearm. But we live in a dangerous world, and you should never leave home without SOME sort of self-defense weapon. Whether it’s a tactical pen or a stun-gun flashlight, both are excellent tools for deterring an attacker.

If you don’t believe me, you should hear the sound of the stun gun I carry — it would make any criminal think twice before attacking me or my loved ones.

Tasers and stun guns are illegal in some states; in others, their availability varies from county to county. If these weapons are prohibited where you live, I strongly recommend carrying a tactical pen. With the way society is headed, getting a tactical pen is a smart, legal and covert way to protect yourself no matter where you live or what you do for a living. Click here to claim one for yourself today.