We’ve all heard that we need to prepare for the worst. Most do that by making their homes a fortress, ready Bug Out bags, or take classes for off-grid living. But no matter how much we do; two things truly dictate the level of preparedness we’re able to achieve. Money is one, a friend of mine loves to say, “no money, no honey”, in other words, without the ability to buy survival items, your “want” to be fully prepared remains at the “Good Intentions” level. The other is the lack of a support circle. You see, if you don’t have a circle of like-minded friends then it becomes difficult to get proper survival information.

So, what happens when the home you fortified, the Bug Out bag you assembled and your circle of friends are nowhere to be found, what then? Ask the folks of Rockport, Texas or Victoria and Corpus Christi. These Texas cities received the brunt of Hurricane Harvey and many homes and businesses were leveled. From Corpus Christi to the Louisiana, persons were forced to evacuate. 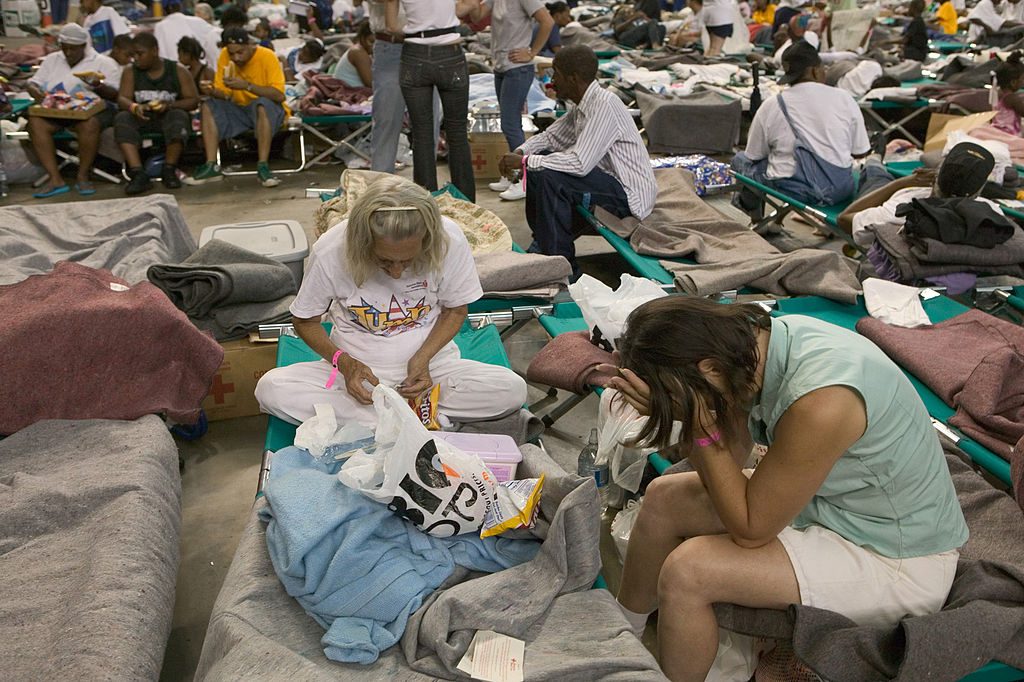 So fortified houses and Bug Out bags were useless, why? Because when you’re forced to leave, the authorities only allow you to keep a handful of items and only the clothes on your back. Then you and your family will be housed in temporary shelters and must endure living in close quarters with persons who may be friend or foe. With some shelters being able to house over 5000 persons, you’re likely to encounter every element of society from the church lady to the thuggish thug. Safety, in a close quarter environment, now becomes your priority.

A bold fact is that most people are law-abiding and did as they are told by shelter officials and “DIDN’T BRING ANY WEAPONS”. However, when people are forced by circumstance to live in close quarters the bad element will eventually rear its head. Fact, the media or governing officials downplay all the crime that occurs in shelters from assaults to simple theft. Regardless how you found yourself at a shelter few persons prepare for this situation.

Prior to most disasters, a list of shelters is posted and officials begin to inform the public of areas that might be evacuated. With any major disaster, a potential for mandatory evacuation exist, when that happens you’ll be limited to extreme essentials and anything resembling a weapon is prohibited. So, before that happens, be prepared for close quarter survival.

One thing you can do is visit your designated shelter and ask about volunteering, especially if you’re not planning to leave the area. Why volunteer? When you do, you get a pick of the best spots in the shelter. Also, volunteers work the food lines and have access to staff restrooms and showers, which are usually separate from evacuee’s or at the least use of staff facilities is limited, monitored and much safer. If you do have to bed in the main area, pick cots close to areas where staff are present. Staff members tend to man these areas in shifts.  In addition, most security/law enforcement personnel tend to stay in those areas as well.

What if your area, like in Rockport, is hit so hard even the shelter you signed up at can’t open? You and family may end up as just another evacuee. Upon arrival at the new shelter, you may not have the choice of where your family is placed. Now survival becomes the priority.

First, try to stay with others who are from your neighborhood or city.

Second, keep an eye out for moms with small children and seniors. When trouble is near the mothers go into “mother hen” mode and gather their children, seniors too start clearing the area or position themselves so as not to be in harm’s way.

Third, offer to volunteer. As mentioned before, this can give you access to additional services and facilities reserved for the staff.

Forth, befriend first responders, casual conversation can reveal, from the responder’s point of view, valuable info like what are current conditions on food, fuel, water, and the expected length of recovery. First responders are better informed.

As for weapons, think Jason Bourne, make use of what’s available. For example, most cots have a wooden or aluminum bar at each end to keep the cot rigid, however, one end can be removed safely and makes a great old-style police baton. Also, until you become comfortable with non-friends and family, plan on sleeping in shifts. Likewise, if you must leave your sleeping area, one adult should remain, even at meal time.

Defensive personal protection tools, like those sold by Jason Hanson, are a must.  Items like the tactical pen or self-defense flashlight stun gun should make it through security.

Oh, and before I forget, communications, outlets to charge your phone or tablet will be limited but when you prepared for possible evacuation get a survival radio that is hand cranked and has USB ports to charge your cell phones. This tool alone can be your biggest asset to barter with for extra food, water, and protection. Guard this survival item above all, it will disappear if you blink.

At the very least maintain a positive attitude and a superior state of mind because loved ones are counting on you.