A while back, Jason Hanson and I had a short conversation about Ecuador.  We discussed how it’s portrayed as a very safe place and is being promoted as a great retirement location.  Among other things, I sent this report to Jason Hanson and he asked me to share it on the blog. 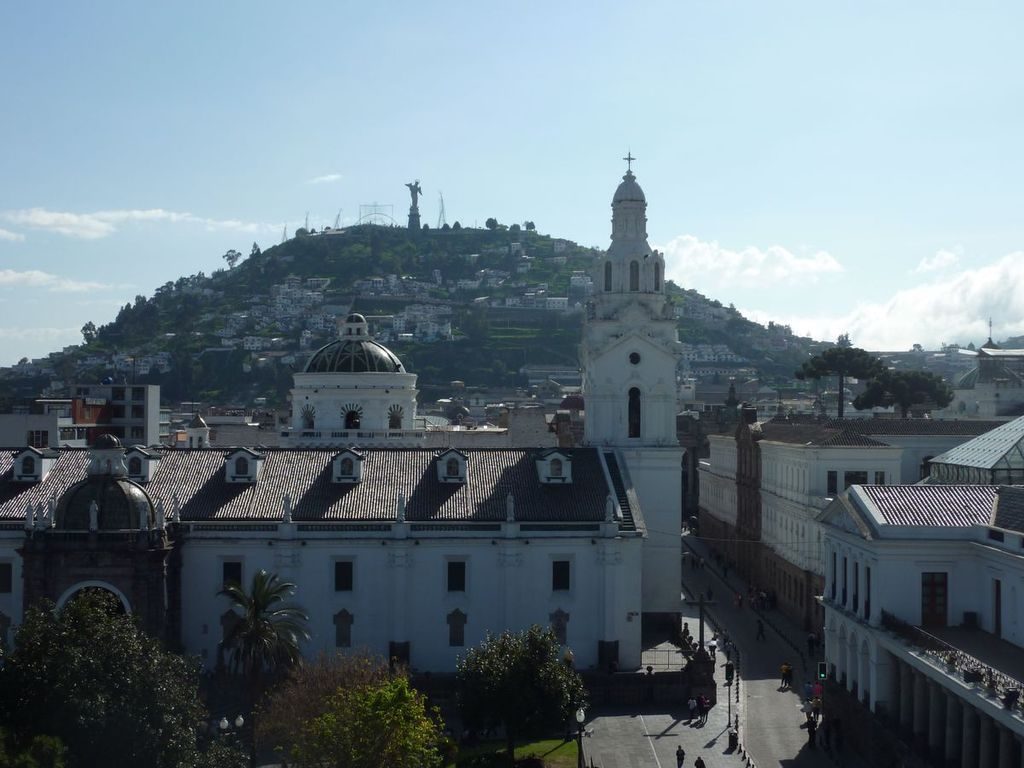 Before you begin, there are some things you should know about this report.

I think that’s it.  Here’s the report.

Let’s begin with the express hijackings in Quito. I’ve found few credible resources on the matter, but from what I have seen the number averages 4-5 per night.  Although taxi safety precautions are listed on the US Embassy website, I can find no reference to the abduction reports themselves.  However, it is regularly discussed and a recognized as a growing problem amongst locals.

The hijackings occur in taxis; the driver pulls over on the side of the road and people following in a car behind the taxi exit their car and approach the taxi armed with either knives or guns. In all cases that I know of or have read about, the driver of the taxi was most certainly a part of the hijacking team. These hijackings are not specific to tourists (Equal Opportunity Thieves).

The taxi driver and armed thugs drive you to a bad part of town and take you to an ATM where you are forced to draw out your maximum amount of money. You are then driven around town until after midnight when you are taken to another ATM; rinse and repeat. Once the second ATM withdrawal is complete, victims are dropped off in the dangerous outskirts of town.

I can find no information that would indicate specific targeting techniques, including first-hand accounts. From what I can tell the taxi driver makes the determination of targets and then communicates this info to the hijackers. I suspect that these are done by visual signals to be less apparent. Taxis commonly do things like leaving a blinker on for a significant amount of time in unpredictable ways. In one instance I had a taxi driver turn on his right turn signal for about five minutes before making a left-hand turn. When targeting groups, men who could be perceived as a threat are often stabbed or shot and disposed of immediately, while the rest of the group is forced onto the ATMs.

I did not intentionally go digging into this problem. This is purely circumstantial evidence and, although I’m not generally a conspiracist, there may very well be some irrational conspiracy thoughts on the matter in my mind. I’ll stick with what I know for now.

As of February 2013, there is a new airport for Quito ( http://www.economist.com/blogs/americasview/2013/04/quitos-new-airport ). The new airport is about 45 minutes from the center of town. The city limits entrance of taxis at the main entrance to “city approved” taxis. I have heard first-hand accounts of peddlers offering cheaper taxis to people flying in and leading the traveler to dark, distant, parking lots away from the main taxi lane. All of the accounts I’ve heard on this resulted in the traveler(s) getting concerned and returning to the main taxi line. “City approved” taxis have certification numbers on a sticker in the front and rear windshields as well as on the driver and passenger window.

There is also a very nice shuttle bus that runs from the new airport to the old airport for a price of $8. .  G4S is the security company on-sight and directly hired by the bus company.

When the airport moved to its new location, a new shuttle bus company was established. They originally prepared to purchase a property in the center of town in a safe area. Their attempts to purchase the property were blocked by the city council. There could be a myriad of reasons for such blocks and I don’t see this as specifically out of the norm. Further attempts to purchase land for the operation were also blocked.

The mayor of Quito, seemingly very supportive, arranged to allow the new bus to use the abandoned old airport as a shuttle point for the service. This turned out to be the only option available and the company accepted the location despite it being in a dangerous area.

As customers of the bus started being hijacked regularly, the company began efforts to protect its customers. They attempted to restrict taxi companies to those certified or with good reputations but were unable to do so.  .

The city has reacted to this situation by placing a police officer in a truck outside the bus station/old airport. While I waited for a legit taxi, this police officer spent most of his time on his cell phone. They do nothing effective to try to curb the abductions.

Security is heavily pocketed in Quito and almost overbearing in these pockets. While groups of thugs, typically 2-8, roam most of the streets unabated, small sections of town are heavily secured. Troops, police, and private security alike are dressed in full battle-rattle (similar to riot control gear). G4S even went to the extreme of shin-guards in some cases. IBA or other types of body armor were more the norms than not. These men generally operate in 2-3 man groups and generally within eyesight of one or more other 2-3 man teams.

These secure areas include a small section of about 9 blocks in Old Town, and a section about twice the size around Mariscal Foch during the day. At night the security around Mariscal Foch dwindles to the most immediate two or three blocks, and after 2:00 AM it seemingly disappears. There are certain parks throughout the city that boast about security and police presence. The lack of any such signs at some of the other parks seems to imply “visit at your own risk.”

The military-age male population is generally very aggressive. While there are businessmen in this age group, they don’t seem to be the norm throughout most of the city. These aggressive men are typically heavily pierced, with radical hairstyles such as mohawks and rattails. Most locals, especially women, display physical acts of fear when encountering these people. Most women outside of the secure areas walk quickly and directly in contradiction to the normal lazy stroll. Girls looking for Johns seem to be the exception to this rule.

This is where my conspiratorial mind may be playing a role. My first thoughts when finding out that the taxi hijackings occurred on average 4-5 times per night was “what’s keeping the number from raising?” Of course, the real number may be much higher, but again, it’s hard to obtain any reliable information on this beyond first-hand accounts. I can see only three causes that would restrict the number of attacks at 4-5 per night:

From what I can tell, almost all of the victims survive the hijackings, although some with severe injuries. If there are only a small handful of groups conducting these crimes, it seems that this should be a simple situation to address. The entire abduction process lasts normally 4-6 hours, from the time the victims are picked up until they are dropped off after the post-midnight ATM withdrawal. Typically there are 2-3 victims per event. It seems to me that, if the police were interested in putting a stop to this situation they would be able to get more than enough information from the victims to target the criminals.

If, in the course of a week, the same driver is involved in 5 hijackings, that’s 10-15 victims with a combined time of about 60 hours interacting with a particular driver in one vehicle. It almost seems impossible that enough information could not be gotten from the victims to find the men responsible.

The local population is responding as might be expected. They are using taxis that they know and informing friends and family of all movements. This has produced increased safety for those who do not let complacency set in. Unfortunately, many locals drop their guard at some point or another from the stories I have heard.

Two taxi companies are making great strides to ensure the safety of their clients and reputation. One is employing unmarked vehicles more like an executive service. The other is employing technology by texting customers with the license plate number of the taxi that has been dispatched to get them.

I would like to see hotels and hostels take a more active role for travelers. Some do offer direct airport pickup, but that has not always proven reliable either and it’s more difficult to manage with the new airport 45-90 minutes from most hotels. Since travelers often have nobody to inform about their whereabouts and activities, I would be pleased to see hotels adopt a policy where clients can text or email the hotel/hostel with the plate number and destination for taxi pickups. The hotels would then at least be able to help document the situation after the client has been robbed of his/her phone and other items. I would further be encouraged if those hotels would reach out to contact the client if they did not arrive at their destination at a reasonable time.

Should law enforcement choose to get involved, enabling a GPS system on smart phones could allow police to track victims in real-time. This would obviously be resource intensive if the hotels are not willing to be proactive.

It’s probably obvious that I don’t think Quito is a very safe place.  Most of the people making their retirement home in Ecuador are doing so in Cuenca or other towns and cities.  I have never been to Cuenca, but I have visited many parts of Ecuador.  As a general rule, I don’t recommend Ecuador unless you speak Spanish and have a decent amount of travel experience.  Some of the places I’ve visited in Ecuador, such as Baños, were very nice.  However, they were the exception.

Hopefully, this gives potential travelers some additional ideas of what to look out for when traveling abroad.  Every place is different, so you need to keep your eyes open.  But keep in mind things like the heavily armored police force.  Many consider this to be a sign of safety, but it’s the opposite.  It takes a large investment to get police and security guards in body armor, and companies don’t make that investment unless the threat is high.