Home preparedness Hurricane Harvey Reminds Us To Be Prepared

I’m sitting here watching the news on Hurricane Harvey.  To be honest, some of the news is frustrating.  No matter how many times we see these incidents, I still hear people saying “help never came.”  It’s no surprise that help never came.

I grew up in Hurricane Alley on the coast of North Carolina.  I know how hard it is to leave your home and how the situation can become worse than expected quickly.  However, the lack of preparation that I’m seeing from some of the people on the news is frustrating.

Every day we do our best, along with many other websites and media sources, to encourage people to be prepared.  Yet what I’m watching is a lack of basic preparedness demanding resources that could be used to help people who are in more need.  In fact, Houston’s Mayor Sylvester Turner recently held a press conference asking people to stop calling 911 unless it’s a life-threatening event.

Before I get into this, I want to thank Fox 26 in Houston for sharing their live news on YouTube.

Out of water during a flood

One of the things that I saw was a guy risking his life to rescue people with his boat.  As I watched, it seemed like he was able to rescue dozens of people from flooding homes.  However, along with helping to evacuate people, he has also been bringing bottled water to people who do not need to be evacuated but are out of fresh water.

If most people took simple preparations to have fresh water, this guy could focus his efforts on evacuating people who have been in Hurricane Harvey’s destructive path.  There are just so many ways that someone could get water right now.  First, they could simply collect rainwater.  Then there’s water storage, which every person can do.  Finally, a good water filter would provide all the water you would need to ride out this situation right now.

*Update: The city announced that tap water is still safe to drink after seeing this. 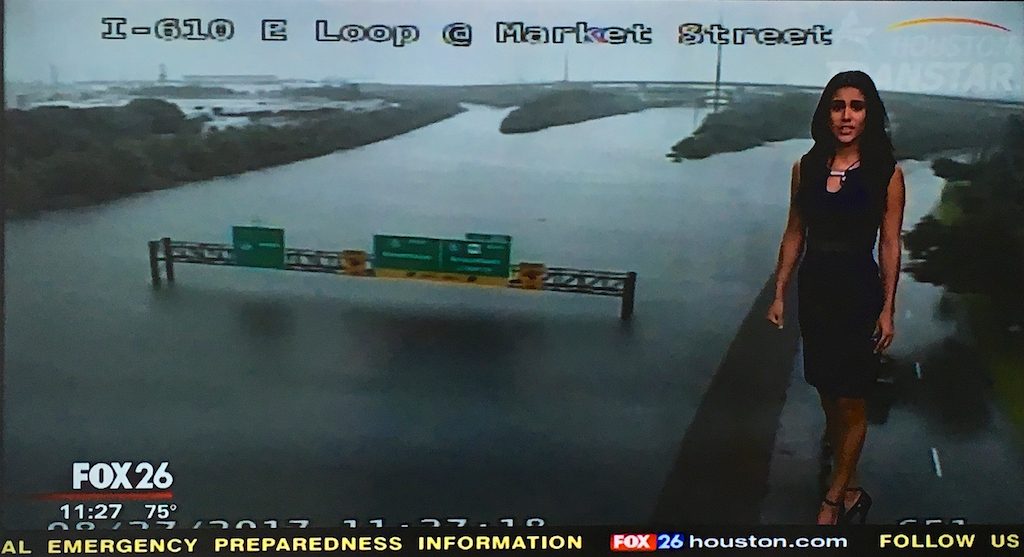 There were others out in boats as well.  Another pair of men made a trip to rescue an overweight woman that was trapped in a home.  The unique aspect to this was that others were able to walk out of the same area.  This woman appeared to be in her 40’s and had to use precious resources simply because she was out of shape.  The men who rescued this woman told the reporter that there are more elderly and disabled people who need rescuing.

By being out of shape, you put yourself in a position to need help rather than being able to take care of yourself.

Fox 26 is reporting that 10% of the area has lost power.  That’s surprisingly low given the water levels.  However, many of the reporters have mentioned loaning out cell phones to call for help.  A cell phone is a great way to keep in touch and can save your life in some cases.  But it has to have a charge.  Having some sort of battery backup for all your emergency essentials would be ideal.  However, a simple backup cell phone charger would be enough to call for help.

An emergency television could be helpful as well.  If you’re stranded at home and becoming desperate to escape, you need to know where to go.  Many of the news crews have been listing areas of high ground as well as open businesses.  Any form of communication can save a life, even if that’s just getting the news from a battery powered tv.

Relief is being Grouped!

Now the city of Houston is asking people to group together BEFORE calling for help!  Their resources are so strained that they are asking people to group with their neighbors before calling for assistance.  That tells me that the city is triaging their support.  It’s a sad fact that the resources available need to be restricted to groups, but they do have the responsibility to help the most people they can.

I will point out that I’ve seen some creativity that we can all learn from.  One young man who was fed up with waiting for help decided to escape on his own.  He put his pets in a crate and floated them down the “street” on an inflatable bed.  This is a reminder that creativity is often your most powerful tool in emergency situations.

Remember, it’s not just your life that you put at risk when you’re not prepared.  You also consume resources that could save another life AND put rescuers lives at risk as they attempt to help.

My best wishes go out to those in the destructive path of Hurricane Harvey.  Hopefully, it will end shortly and everyone will stay safe!