In modern America, the idea that we would need pack animals might be outrageous to some.  You may even think that, given the defense department’s budget, the military using them would be crazy.  But we used them regularly in Afghanistan.

It became clear rather early in Afghanistan that we were going to need pack animals.  Many of the towns we would visit would be 6 hours or more by foot with no roads or areas to land aircraft.  When we selected the Bella Outpost, our first outpost in the Waygul Valley, we had chosen the location specifically because it was the first place we could almost land a helicopter.  It couldn’t completely land, but it could hover a few feet off the ground.  This was close enough for us to load or unload the helicopter.

But when we moved into Aranas, our second outpost in the Waygul Valley, there wasn’t any place nearby to land.  We were eventually able to blow enough of the mountain out of the way, but it took nearly two months.  Until then, we were stuck receiving supplies in Bella and walking them to Aranas.

The walk between Bella and Aranas would take between 4 and 6 hours when we weren’t hauling extra gear.  Trying to move 30 days worth of food and ammunition (we were going through a lot of ammo in those days) would mean multiple 12 hour trips one way.

Attacks occurred fairly regularly early on.  Not all the time, but probably once a week.  Hauling too much gear would have made us a weak target.

When we initially started using pack animals, we hired them from local villagers.  This meant that we had to let them know before we made any significant movement of supplies.  If the owner of the donkeys informed other people in the valley, those who wanted us gone would have time to set up a good ambush.

Eventually, while our local security counterparts were delivering supplies, they were ambushed.  Several donkeys were shot, although all of the people survived.  The attackers burnt any of the donkeys that the owner hadn’t grabbed ahold of while he was running.

That’s when I bought Jack 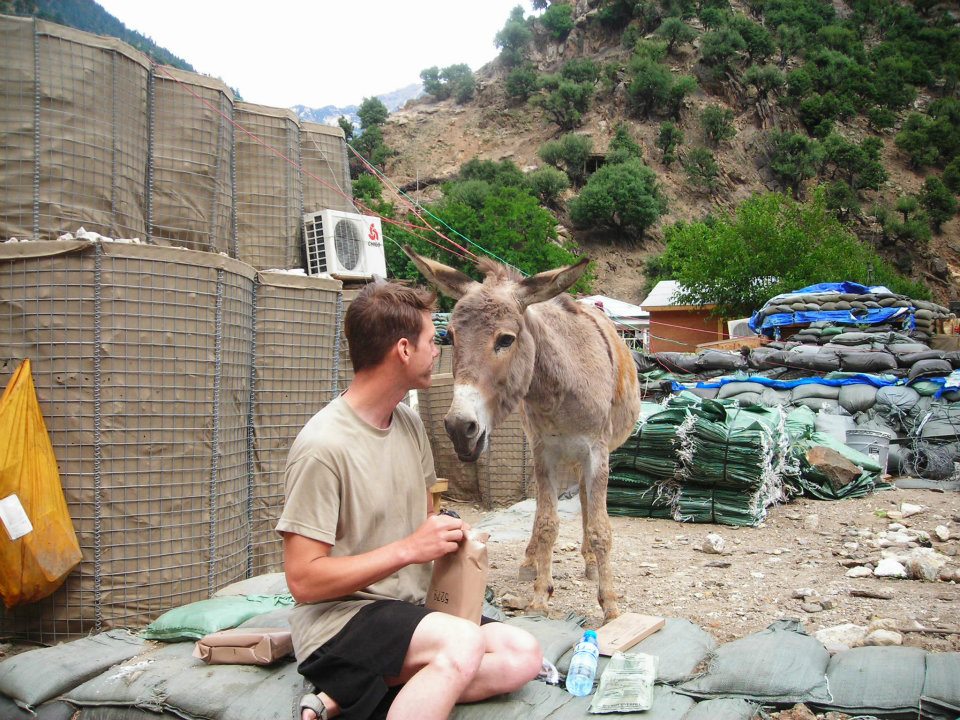 Yours truly and Jack. He would always get my crackers.

As much as I would have rather had a bottle of Jack at that point, Jack the donkey was nice to have too.  He couldn’t haul a platoon’s worth of supplies, but we had set up an HLZ (Helicopter Landing Zone) in Aranas by this point and didn’t need as much hauled.  Mostly we just needed to supply the various OPs (Observation Posts) that surrounded and protected the outpost.  Jack was perfect.

He was surprisingly little work.  I did buy a bag of food for him when I first got him.  However, he generally preferred the grass and bushes and I don’t think I ever bought another.  He also served double duty as our lawn mower on the LZ when the grass got high enough.  The one problem we had was that he loved helicopters.  Anytime he saw one coming in and he would run to the LZ and keep the helicopter from landing.  Someone would have to run out and pull him away to let the helicopter land.  But as long as they informed us they were coming, we could just put him in his pen.

I caught a lot of slack from people just visiting the camp about me just wanting a pet or wanting to be different.  But those who lived on the outpost knew how critical donkeys had been to our success.  I had to buy Jack out of my own pocket because he wasn’t an approved purchase, but it allowed me to test out the concept.

Was he worth it?

Ultimately, by the time I bought Jack we were rarely using pack animals.  He was put to good use a handful of times, but mostly sat around.  Despite that, I think it was a great learning experience.  It was still early enough in the deployment that the possibility of opening a new outpost was very real.  If that had happened, we surely would have needed to purchase an entire train of donkeys.  Knowing how to load, manage, and move them would have come in handy.

It doesn’t hurt that when I tell people they’re acting like a donkey, I have real experience to back it up.