I remember the first time I lost my lunch in an airplane (not including helicopters here).  It was a flight out of Dahlonega, Georgia heading down to Eglin Air Force Base in Florida.  The winds were deemed too high to jump out of the plane, so it landed with everyone on board.  As I walked off the tail of the C-130, the Jump Master commented, “I’ve never seen anyone fill up that many bags.”

I was vaguely disoriented and highly dehydrated.  Needless to say, I wasn’t at my peak performance.  And that plane landed!  I can’t imagine the struggles of someone who had to eject after attempting to salvage a plane that had just been shot down. 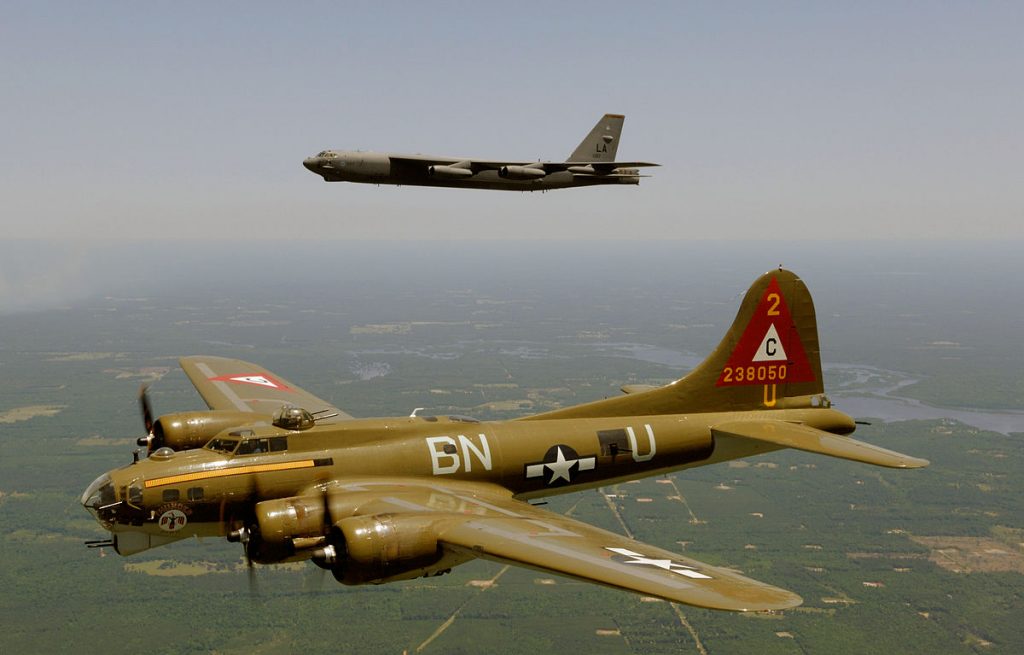 B-17 Thunderbird in formation with a B-52H by Master Sgt. Michael A. Kaplan | Public Domain

Jack E. Ryan was the co-pilot of a bomber in WWII.  Lt. Ryan, from Minneapolis, MN, was shot down on August 16, 1943 near Paris.  He was able to successfully eject only to watch as another plane came dangerously close to his parachute.  He finally landed, but his troubles were just beginning.

A French family found Lt. Ryan and urged him to hide.  Only minutes later two Germans arrived and offered the children candy and tobacco to report the location of the American.  The Germans came within ten feet of Lt. Ryan, but they never saw him hiding in the brush.

Lt. Ryan later found French resistance agents who guided him to a safe farm.  Lt. Ryan spent six weeks at the farm before being escorted to Paris.  There he received false papers and was sent to Brittany.  From there he was able to return to England with a larger group via a fishing boat.

We can learn a lot from 2Lt. Jack E. Ryan’s experience

First, we can remember that even in the worst of times, there are good people.  Even in France!

We tend to assume that when disaster strikes people will turn into monsters.  In some historical cases this has been true, but these are usually the worst-case scenarios where resources become so short that people become monsters to survive.  In many cases, horrible conditions actually bring out the best in people.  Keep this in mind when you’re considering how you might react in a disaster.

Could a bag of rice and some Jelly keep your neighbors from becoming so desperate that they might do you harm?  Are you prepared to be the Good Samaritan if you find someone in need?

I’m not suggesting you ever drop your guard, but a friendly hand may improve the situation for everyone.

The next thing we can take away from this is something I think you might have caught already.  Did you wonder how the French family was able to communicate that Lt. Ryan needed to hide?  It turns out that he spoke French.

Travel can be both educational and enjoyable.  Consider taking the time to learn the local language before visiting a country.  You probably won’t become fluent, but a small amount can go a long way.  You’re very unlikely to get shot down on a family vacation, but a car accident or hotel fire can be a life or death situation and effective communications can be the key to survival.

There’s one thing I can’t figure out

As you may have noticed, I’m not the world’s leading expert on aircraft.  The official archives of this evasion only list Lt. Ryan as being on a “bomber”.  My guess is that this would be the B-17.  Are you a history buff that can tell me if I’m on the right track or if there were other bombers being used in WWII?