Home Self Defense Get Creative With Everyday Carry

A few weeks ago, I met a woman at a conference who carries her tactical pen in one of the most unique places I’ve ever seen.

Generally, women have to be a little more creative in where they put their everyday carry items, because women’s clothing is designed differently than men’s. This woman chose to clip her tactical pen to the inside of her boot, where it was barely noticeable, like so: 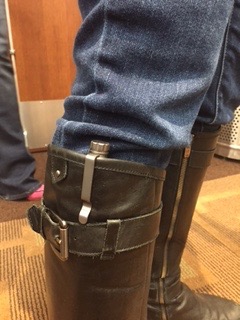 Since so many of you have purchased tactical pens of your very own, I’d like to quickly cover some of the other ways you can carry the pen on your person.

Honestly, it’s pretty simple for guys, since most of our pants or shorts have large pockets where we can easily clip a pen.

This makes the pen easy to pull out and use, which is why clipping the pen inside my right front pants pocket is my No. 1 everyday carry method. 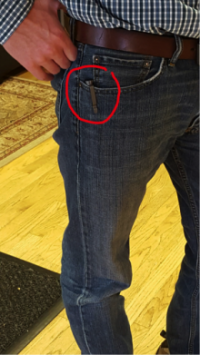 But let’s say this isn’t an option for whatever reason. Another way to carry a tactical pen is with a lanyard. You can clip the pen to the end of the lanyard and it will simply look like a regular writing pen hanging around your neck. And you will be able to access it quickly in an emergency.

Even better, if you can find a lanyard with a detachable end, you can avoid the hassle of unclipping the pen from the key ring. When you’re being attacked, every second counts.

Now, as I mentioned earlier, women’s clothing usually presents a bigger challenge when it comes to carrying a tactical pen. Rarely are women’s pockets large enough to store much of anything — something my wife complains about all the time.

Many women I train choose to clip their pen to their purse pocket or purse strap. This way, they can access the pen quickly and it’s always with them when they are out in public.

Of course, as demonstrated by the woman I met at the conference, clipping your pen to your boot is another great idea. As long as you can get to the pen quickly and easily, that’s all that matters.

Many women I teach mention they like to jog and want to be able to protect themselves while running. In this case, I suggest clipping the pen to the neck of your shirt or the strap of your sports bra so you can access it even when you aren’t carrying anything else.

No matter what occasion you are dressed for, you need to consider how you’re going to carry your tactical pen. Get creative!

And remember that a tactical pen is useless if it’s buried in your purse or left in your car. So the next time you are contemplating which outfit to wear, be sure to choose an option that allows you to carry your tactical pen.

Personally, I always have my tactical pen on me no matter what I’m doing — and I hope you do too. A tactical pen can deliver a painful message to an attacker, giving you the perfect opportunity to escape.