You know what gets my goat? 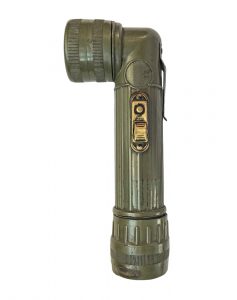 A cheap, broken flashlight, that’s what!

When I joined the Army in the late 90’s, supply issued me a green, L-shaped flashlight. It came with colored lenses and a fancy clip you could use to attach it to your LBE (Load Bearing Equipment).

That flashlight was everyone’s favorite new toy. That one lasted me through basic training, but when I got to my first unit, I found out they didn’t last long. They broke just about every 6 months. I must have gone through half a dozen of them before my first deployment.

Back then, we had to use only military issued equipment. This meant that I had to buy another cheap, green, L-shaped flashlight every few months.

The “logic” behind only using military issued equipment was that if we ever went to war, the Army supply system would have that equipment in its catalogue and we would be able to get it replaced. And we all “knew” that when we went into war there would be no PX (Post Exchange/Army Wal-Mart).

Since it would be wartime, any losses would be covered as a combat loss meaning I wouldn’t have to buy it each time. When I asked why I had to buy a new one each time it broke in training, I was informed that that’s what we get that fantastic $200 per year clothing allowance for.

It all made sense…

After the events of 9/11 we were at war. We all expected the logic behind using only military issued equipment to stand. But the truth turned out to be quite the opposite.

As expected, my flashlight broke like clockwork about every six weeks. I wasn’t even taking it out on missions; this was just bouncing around in my rucksack.

I went to supply only to find out that they did not have spare flashlights or parts. But there was a place where we could get them: the mobile PX that came around once a week. It had all sorts of flashlights for sale.

Needless to say, the theory burst when the rubber hit the road.

It didn’t take long for us to start using civilian products. It irritated many senior leaders, but their long-standing defense of using only issued gear had gone to the cuckoo’s nest. There was no turning back now.

Before long, the Army was issuing us items that only a year before would have resulted in us explaining ourselves to the senior leadership. One such item was a tactical flashlight. This thing was bright, attached to our weapons, and even came with a remote pressure switch that allowed us to turn it on without moving our hands.

Very few weapons had tactical flashlights by the end of that deployment. And by the next deployment, many people were buying their own Later versions got better, but they were still a budget item.

A Good Flashlight Is Important

A good flashlight isn’t just nice to have.  It’s a necessity.

A storm knocking out your power can be a disaster.  Finding the right switch or fuse to replace when the lights go out is dangerous in the dark.  It may be a simple task, but it’s important to have light to do it properly.

And the value of a tactical light during a home invasion also can’t be overlooked.  Finding and blinding your target can provide much needed moments.  The movies would have you believe that you can acquire and engage your target in an instant.  It is possible with proper training.  However, even those of us with experience need a moment to ensure that the background is safe.  The worst thing in the world would be to shoot a home invader and have a round pass through to a child or loved one.

Having that spare moment to ensure that the area behind the target is clear is critical.  A home invader won’t care who he hits and doesn’t need that extra split second.  Blinding the invader is a great way to buy yourself the moment you need to ensure that your rounds are going to be on target, and only on the target. 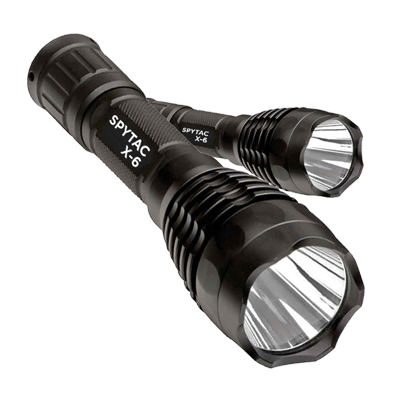 Unlike my Army issued tactical flashlights, the SPYTAC X-6 tactical/spy flashlight won’t leave you in the dark. It’s durable, lightweight, and weapon mountable. Made from Mil-Spec 6061 aircraft aluminum, this spy flashlight is meant to last.

It is small enough to fit in a pocket, making it a great option for that late night check on the power or a walk around the block.  Mounted on your rifle, it makes a great blinder, allowing you to take a clear shot.  You can also use it as a striking tool in emergency situations.