Home Blog How To Defend Yourself Against Carjacking

In the auto industry’s efforts to make vehicles harder to steal, they’ve unintentionally made our daily lives more dangerous.  As cars have become harder to enter, getting the car at the point that the owner has opened the car is now much easier than breaking in.  This puts you face-to-face with a potentially deadly criminal.  Carjacking, which is essentially a more dangerous form of car theft, is on the rise.

Carjacking is becoming such a problem that the Baltimore Sun titled an article “Carjacking becoming a youth ‘sport’ as numbers climb”.  While there are no national statistics specifically on this crime, some cities have reported drastic increases.  The problem is hitting residents in Texas as well.

A fender bender may not be what it seems

It’s not good enough to spot a carjacking after it happens.  You need to be able to identify the situation before it occurs.  In my book, I write about many ways in which carjackers are taking advantage of people.

Two of the ways that I discuss in my book are “The Ruse” and “The Good Samaritan”.  But the one I want to share with you today is “The Bump and Rob.”  This technique is becoming more popular, and thus more dangerous.

The way this technique works is that the criminal will create a small accident by rear-ending the victim.  The victim will react normally by getting out of the car to evaluate the damage.  At this point, an accomplice will move into the driver’s seat and steal the car.

Often times, this will include weapons and violence.  The thieves know that you will instinctively return to your vehicle if they give away their intentions too early.  So they will ensure that you are far enough away and often detain you with a firearm.  If you attempt to return to your car and drive away, you risk being shot. 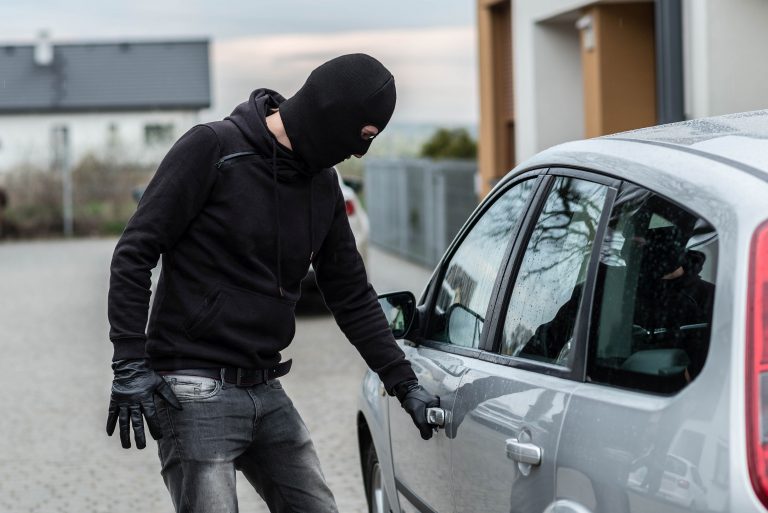 How to defend yourself against carjacking

One critical thing to consider is your exit route.

In my book, I tell of a personal experience in Baltimore.  In this situation, a man ran up to my car and tried to open the door.  My locked doors stopped him.  As I began to accelerate, a woman stepped in front of my car and tried to stop me.  I was able to swerve around her and get out of the ambush zone.  When I looked back, I saw about 10 people rushing to where my car had been.

By using some basic techniques (locking my doors) along with some more advanced skills (maneuvering my vehicle effectively), I was able to escape this attack.

Remember that keeping your hands at the nine and three o’clock positions on the steering wheel increases your control over the vehicle.  Keeping your hands in these positions automatically forces you to keep your elbows bent, which enables you to get the most mobility out of your car.  Whether they rush or trap you, being able to maneuver your vehicle is critical.

There’s so much more

There are a lot of ways carjackers can attack.  Likewise, there are a lot of things you can do to protect yourself.  Situational awareness is the key.  But you need to know what to look for in various situations.  I’ve dedicated an entire chapter of my book to the art of survival driving.  There is also another section dedicated to situational awareness.  With these tools you can significantly increase your chances of avoiding a carjacking situation.

From the beginning, my goal has been to empower people just like you to live a safer and happier life.  In order to do that, I’m offering my book, “Spy Secrets That Can Save Your Life” for free.  It has several analyses on real world carjackings as well as other things that can really save your life.  Click the image below for your free copy.