Home Blog James Bond Tips for Where to Sit In Restaurants

This Week: Where you never want to sit in a restaurant… How to create an Intrusion Point… How to make sure your conversation is not being recorded… The rifle and handgun I carry… And, if you have to be in shape for training.

Today, I’m going to give you some “James Bond” tips of where to sit in a restaurant. I realize that all of these won’t apply to you, but you never know when or how this knowledge will come in handy. 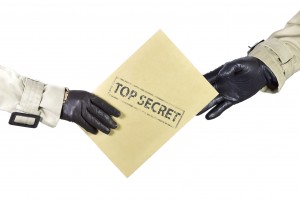 Plus, if you eat out a lot (I used to before I ended up with three kids under the age of four) then you’ll definitely want to pay attention to the following.

In the intelligence business you always sit facing the door so you can see who’s coming in and if anyone is following you. If you’ve ever been in the military or law enforcement then you’re very familiar with doing this.

However, not only do you want to sit facing the entrance but you also want to avoid sitting next to any windows. Why? Well, if you’re being followed the people following you can see exactly where you are located so they’re not forced to come into the restaurant and see what you’re doing. 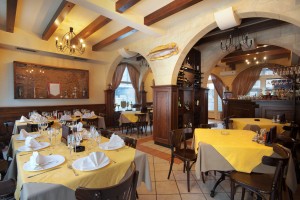 In other words, you want to use the restaurant to create what is called an “Intrusion Point.” You see, you may not always be sure someone is following you and if you sit near a window they know what you’re doing and can watch you from their vehicles.

But, if you sit where they can’t see you, they’re forced to enter the building and when you see them come in and look around then you’re able to have a better confirmation that you are indeed being followed.

What’s more, you want a table that is as far back in the restaurant as possible. Again, this goes back to creating the perfect Intrusion Point. If you have a table right near the entrance of the building then surveillance (or whoever is following you) doesn’t have to go very far to locate you in the restaurant. 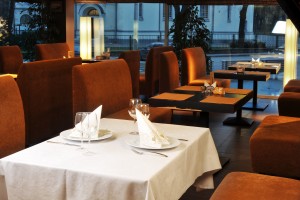 But, if you’re in a far back corner they’re forced to look all around, which makes them really stand out and easier to identify.

Also, in the intelligence world you never let the hostess choose your table for you. You don’t know if that hostess is working with a foreign government and she has been instructed to take you to a table that has a tape recorder underneath it. (Yes, this happens in real life more than you would think.)

Instead, when the hostess is leading you to a table you point to the table you want and ask if it’s okay if you sit there. (The way I did this is that I would say I had an important business meeting and is there a table in the back that is more private. Since a hostess wants to accommodate you I was always told ‘yes.’)

Like I said, I know you’re probably not running around trying to avoid Russian or Chinese surveillance, but these tips can also help keep you safer if there’s a terrorist attack and a gunman bursts into a restaurant where you’re having dinner with your family.

From Reese C: You’re book saved me from quite a gnarly situation the other evening, while at the same time getting me in a lot of trouble the following morning. (Everything worked out in the end) you’re book was fantastic!

A: You’ve certainly piqued my curiosity, especially how the book got you in trouble the following morning. (I hope you didn’t attempt to steal a car or anything like that.)

From Walter H: What are the dates for the Ultimate Spy Week?

From Amanda D: Hi Jason, I had a question about where to sit in public places like trains, buses and restaurants. I know you should be near an exit where you can see but are there any tips…

A: I hope that today’s article helps you out.

From Walt F: Is there a handgun and rifle that you personally recommends for SERE purposes.

A: I built a custom AR that I use. For off the shelf rifles I would go with Colt or Rock River Arms. For a handgun, I would recommend a Glock for most people because of the ease of use. I carry either a 1911 or Sig Sauer P226.

From Patricia A: Looking at the agenda of the Ultimate Spy Week, I feel some would be very helpful to me. I do have a concern. Is there a maximum age limit to take your classes? I am 71 years old. Thank you for your response.

A: I’ve had people from all walks of life take this training with the oldest being 77 years old. You don’t have to be in any special shape to attend the Ultimate Spy Week.

From John N: I do not even have a webcam on my computer. My wife has one on her laptop, so I will be sure to share this with her. I see no reason why I need a webcam unless I am going to be doing a lot of Skypeing, which I do not plan to do.

A: You’re a smart man. I would definitely recommend your wife cover hers up unless she is using it to Skype.