Home Blog Why I Carry the Sig Sauer P238

I hope you had a wonderful Thanksgiving or at the very least survived it. My family had a great time in between the cousins fighting and the family pictures, which is the surest way to put everyone in a bad mood when trying to get a 3-year-old and 18-month old to sit still. 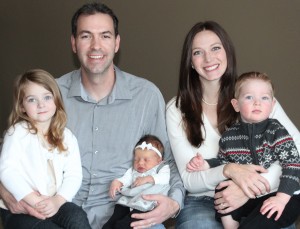 One of the best parts of Thanksgiving was going to the shooting range with my relatives and helping those that weren’t very familiar with guns to learn more. Plus, they got to test out certain guns they had never shot before such as an AK-47 and my Ruger American bolt-action .308. (A great bolt-action rifle if you don’t own one.)

But I spent my time with the Sig Sauer P238

While they were mostly shooting the rifles, I spent time practicing with my Sig Sauer P238, which is one of my favorite pocket guns. The fact is, I know many folks who have their concealed carry permit but don’t carry daily because they say it’s not comfortable… but if they started carrying in their pocket that excuse would quickly disappear. 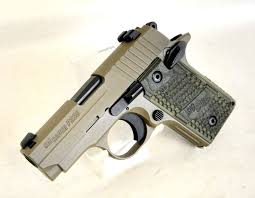 I like the Sig P238 because not only is it a pocket gun, but it’s a pocket gun that’s as easy to shoot (and hit your target) as a full sized gun. In other words, some pocket guns are ideal for only close quarter encounters and it would be tough to hit a target at a distance. (Some also feel like a fire cracker going off in your hand when you shoot them.)

But the P238 has an excellent trigger and recoil and I have no problem hitting my targets from 25-yards. Of course, most self-defense encounters occur within 7 yards, but it’s still nice to know you can hit a further target if the situation arose. 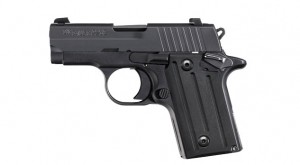 What’s more, the Sig Sauer P238 that I own comes with tritium night sights. Night sights are always a great edition to any firearm since bad guys like to come out at night.

The only real downside to the Sig Sauer P238 for some people is that it’s a 1911-style gun meaning it’s got a thumb safety. In other words, if you’re not a 1911 fan (I am) and you don’t want to practice regularly then this gun is not for you, because you might forget to take off the safety in the heat of the moment.

But if you want a gun that shoots 6 + 1 in the chamber, and is easy to shoot and be accurate with then you should head to your local range and see if they have a Sig Sauer to test out. Also, see if they have any pocket kydex holsters so you can practice your draw, because you need to make sure the gun fits with the clothes you wear and that you’re able to draw and fire in around 2 seconds. And if you can do this and like the gun, then you’ll probably want to carry the P238 in your pocket just like I do.

From Chev N: It’s Laser clear… I HAVE to get your book…I’m onboard! (and many thanks for the vids and free gifts!)

A: I’m certainly not going to disagree with you, I think my book will benefit anyone and everyone. You can get my book plus a ton of free gifts right here.

From Ben W: While in Paris I have had the opportunity to review the modus operandi of the attacks. The Israelis’ adopt the ” swarm ” approach to active shooter incidents. When a shooting starts, the default reaction amongst Israelis is to move towards the shooter and not away. Moving away, exposes more viable targets for the shooter. Swarming the shooter, or shooters, incapacitates them by sheer force of numbers. This takes courage but saves lives.

A: You are absolutely correct that the Israelis’ do it the right way. This is the method the US needs to adopt and people need to start training this way.

From Bob P: I’ve seen how your duct tape escape works, when your hands are taped in front of you. A good professional will always tape your hands behind your back. Does your method still work if the hands are behind your back, and is so, can you do a video to show how it works?

A: Most criminals will tape you in the front so they can lead you around and control you. It’s actually hard and time consuming to duct tape someone from behind, which is why we do this during the live Spy course so people can see it’s not likely to happen. 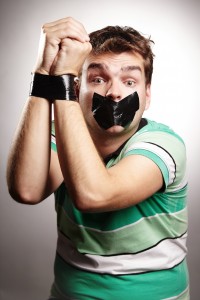 From Dave K: Quick note about your AK-47 comments/recommendation in the November newsletter. Agree we should train with AKs… although we’re equipped with ARs we also train with AKs to allow seamless battlefield pickups of downed weapons.

A: You’re 100% right. You never know what weapon you’ll have at your disposal, which is why I train on all types of rifles including the AR and AK.

A: Thank you, I really do appreciate it. I personally use all of our products as do my family members so I only want the best. (Click here to see a video of the gun belt that Chris mentioned, which has 3 hidden compartments.)