This Week: A new holster from Tagua Gunleather… States where you can’t have a baton… What to do during a home invasion… And, why you shouldn’t carry a gun in the small of your back.

I need a new holster like I need a hole in the head. But, since I can’t leave well enough alone and am always interested in checking out the latest holster designs, I recently got a new holster for my Springfield 1911.

It happens to be a leather holster, and when it comes to holsters I own both Kydex and leather. Both types of material work great and I have no problem having a holster made out of either, even though I know plenty of folks who will only use leather or only use Kydex.

My new holster is the 4-in-1 holster by Tagua Gunleather. What’s unique about this holster (as the name implies) is that you can wear it in several different positions. 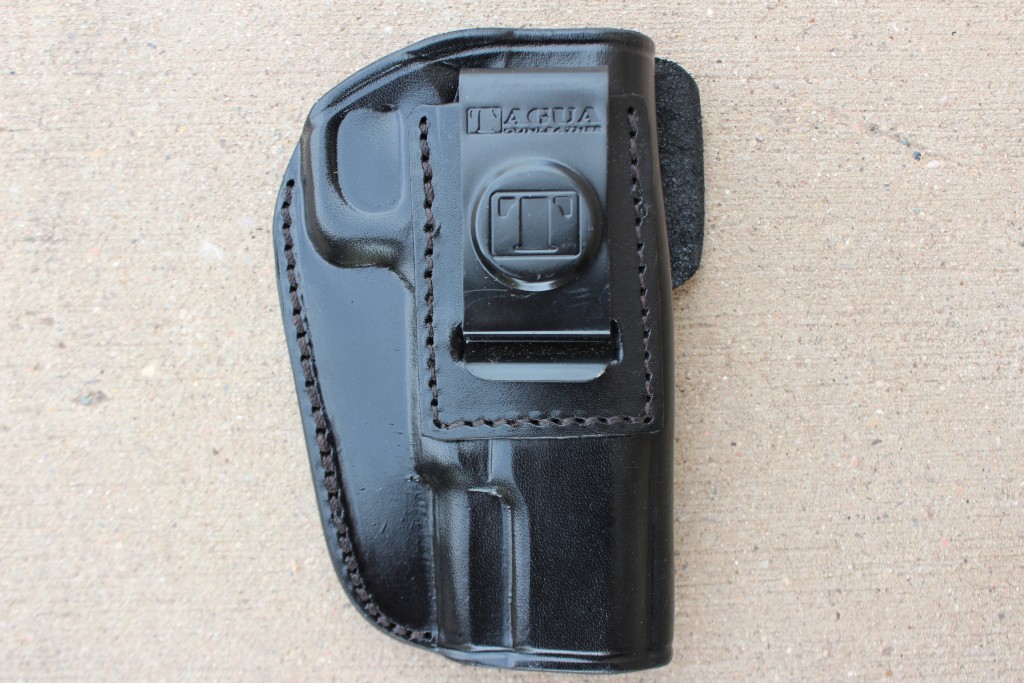 First, it has a sturdy metal clip that allows you to use this holster while carrying inside the waistband. And, on the other side of the holster are several slots for wearing the holster on your belt.

The slots allow you to wear the gun outside the waistband in a traditional vertical position with the gun at the 3 o’clock position on your hip. But also, you can set up the gun for cross draw or to wear in the small of the back.

My personal preferences for concealed carry are outside the waistband at the 3 o’clock position when I have a cover garment such as a jacket. I also open carry in this position when I’m walking around my 320-acre property checking things out at my shooting range. 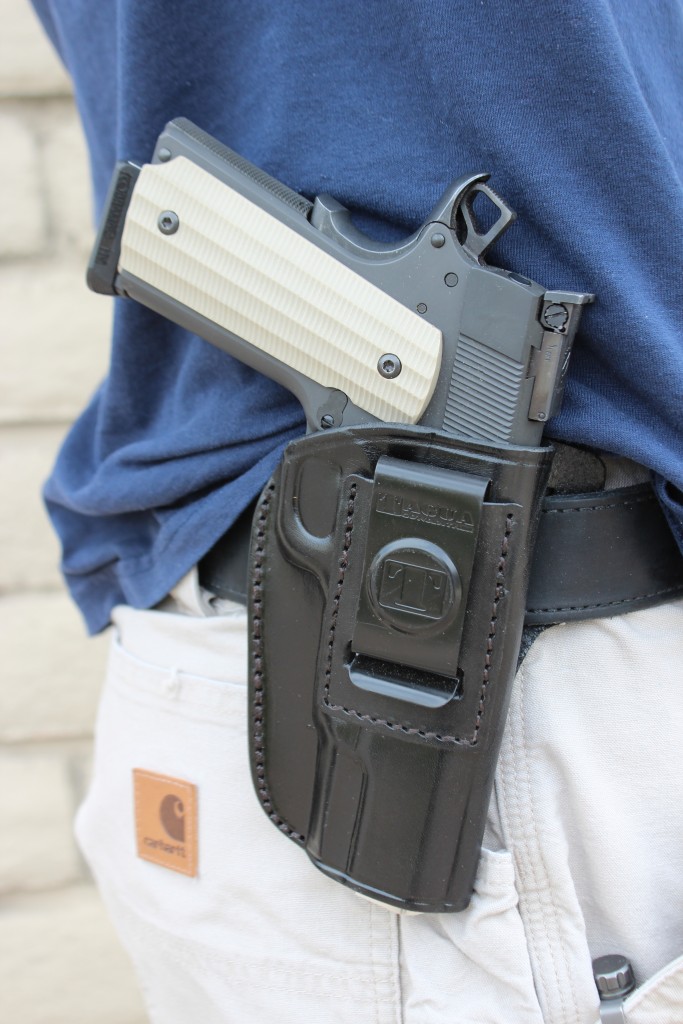 If I don’t have a cover garment and am just in a t-shirt, I like to carry inside the waistband at the 4 o’clock position so the gun is sitting just behind my hip and is well concealed. This new 4-in-1 holster allows me to do both.

Also, even though this holster allows you to set up the gun to be worn cross draw or in the small of your back, I wouldn’t recommend either of these positions.

With cross draw, it typically takes longer to draw the gun, but more importantly, many folks will accidentally muzzle someone standing next to them as they complete the draw. In other words, they will point a loaded gun at an innocent person by “sweeping” them with the muzzle as they bring it up on target.

The problem with carrying a gun in the small of the back is twofold. First, it takes longer to draw the gun from this position because instead of just reaching near your hip, you have to reach all the way to your back.

Another major problem is that if you happen to fall backwards and land on your back you could cause yourself some serious back injuries. When I was a rookie police officer we were told about another officer who had to retire on injured disability because of an incident where he kept a backup gun in the small of his back and fell wrong during an incident.

So far, (it’s a new holster) I’ve had limited time with the 4-in-1 by Tagua Gunleather. However, it’s doing what it’s supposed to do, it’s comfortable to wear, it allows me to get a solid grip on the gun and has a smooth draw so I’ve got no complaints. 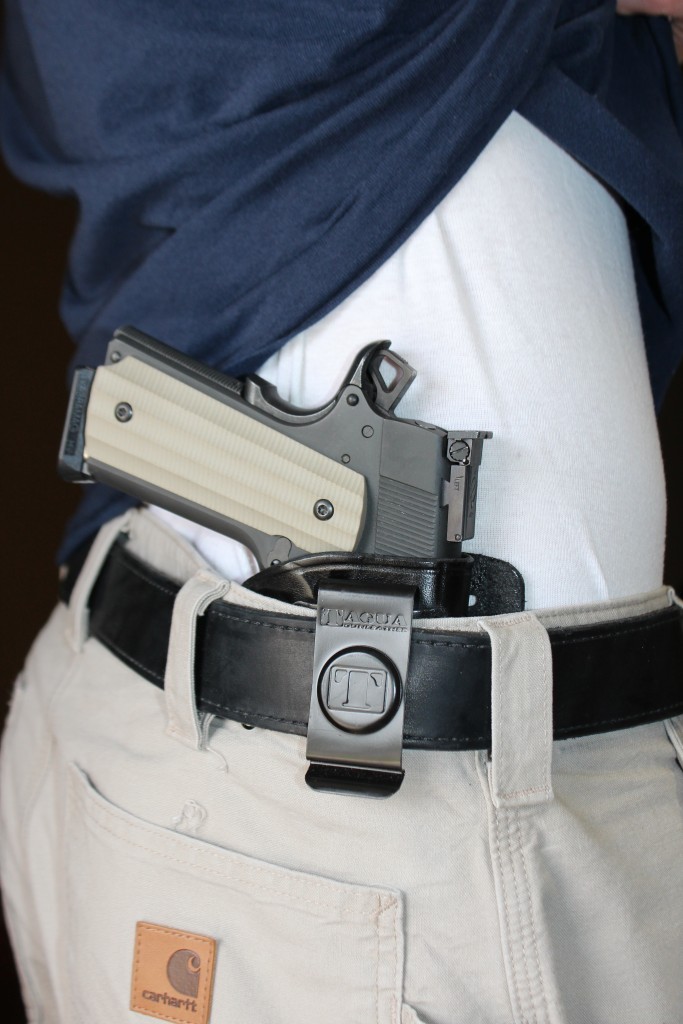 From Ben W: To add to the information on expanding batons: In the state I live in you can legally own a baton. But simply expanding the baton towards anyone is considered “Assault with a Deadly Weapon”. It’s treated the same as hauling out a lead pipe to smash someone!

A: Like I mentioned last week, you have to know your state’s law, as you do. However, I want to point out that I’m sure if you were using the baton for self-defense purposes only then you’d be fine. Whether it’s a gun, knife or baton, you can’t take it out unless you’re in fear for your life or serious bodily injury… otherwise, yes, you will be in trouble.

From Fred P: Add New Jersey to the list of states where you can’t possess a baton. Or a slingshot, for that matter. Possession of either is a fourth degree felony, subject to a fine and imprisonment of up to $10,000 and 18 months in jail.

A: Being that it’s New Jersey, that’s unfortunately not hard to believe. I’m sure other “terrible” states (Maryland, New York, California, etc.) have similar laws.

From Kevin H: The training seems awesome but is too far away for me at this moment. Please keep me in mind if you do it near DC again. Thanks!

A: My final Spy course of 2015 takes place in Washington, DC. There are a few spots left.

From Parker G: Hi Jason, I have a question about if someone breaks in. If someone ever did break in do you recommend to fight, run, or hide?

A: I recommend going to a “chokepoint” (one that puts you between the criminal and your family members) and if the criminal tries to get past there, you do what you have to in order to protect yourself. In other words, I go to the top of my stairs so a criminal can’t get to my wife and kids. If someone is foolish enough to try and run up those stairs I will do what I need to. However, I will do everything I can to try and get the intruder to leave the house. I have no desire to shoot someone unless they give me no choice and are about to attack my family or I.

From Michael L: I’m writing to express my opinion about one of your Mailbag comments. You recommended carrying concealed at your lower back vs appendix carry. However, I have been training in a subsection of Krav Maga for the past 10 years and I’d have to greatly disagree with you. We train at weapon retention in the holster. I’m so happy when I come to an opponent who is carrying in the small of their back. I’ll take their weapon in seconds.

A: I’ve never recommended that anyone carry concealed in the small of their back. In addition to injury, you make a good point about weapon retention.

From Steve A: I just ordered the gun business book and I’m not sure it went through. Do I need to order again?

A: Your order went through and your account is all set up. I’m having one of my employees contact you today to give you assistance. (If you didn’t get the Retirement Gun Business Guide over the weekend, click here now.)

P.S. Click here to see how to start a retirement gun business (from your kitchen table) that generates an extra $1,200 a month.