This week: The government releases a terrorist attack manual… Other holster suggestions for carrying when it’s hot outside… A water filter I have never heard of… And, a reader calls me ‘wise’ and ‘insightful.’

About two weeks ago, a Congressman from North Carolina released a 30-page manual called, “Preparing Your Home, Family, and Business For Terrorist Attacks.”

The terrorist attack manual covers how to deal with possible attacks such as chemical threats, an electromagnetic pulse, and a nuclear blast. It also includes a list of supplies that are recommended for every American to keep at home.

The manual is a beginners guide and basic, but I would encourage you to read it. Even if you get just one nugget of information from the manual then it will be worth your time. 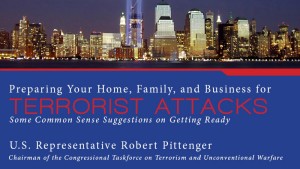 The fact is, since September 11th, our country has been fortunate not to have any other major terrorist attacks on U.S. soil. So far, the government has been able to thwart several attacks but they won’t be able to stop every single one and eventually it’s going to happen again.

“ISIS, Iran, al Qaeda and other terrorist organizations are focused on destroying our way of life. We should recognize their unrelenting focus and determined intent to attack America. Making common sense preparations for a possible attack on our Homeland should be a consideration of all Americans.”

I’m glad to see the government releasing a terrorist attack manual like this because it’s their way of saying, “It’s going to happen and we can’t take care of you, so please prepare to take care of yourself.”

Unfortunately, most Americans will be unprepared for any type of attack. But that doesn’t mean you and I have to follow along with them.

One of the main things missing from the manual is the recommendation of having any self-defense items (guns.) I realize this is a government manual and they’re not likely to say, “buy guns” or “buy weapons.” However, common sense dictates that you’ve got to be able to protect yourself whether it’s from roving gangs of looters or the lone shooter in the mall.

If you want to read the manual, at the very bottom of this email after the Mailbag, is a link where you can click to download the PDF.

Just remember, this is a basic terrorist attack manual and is only a starting point. If you want a more advanced list, you can get my list of 37 preparedness items for free at www.SpyEscapeBag.com.

From Jack H: For 8 months of the year my uniform is also shorts and t-shirt.  I have found holsters like those from “Sneaky Pete” or ‘Carry in Plain Sight” very convenient and unobtrusive.

A: Those are good suggestions for other ways to carry when you’re dressed for hot weather.

From Alex W: Allow me to first say how much I enjoy your products! I own a belt, tactical pen, and a few credit card knives. The belt is one of the nicest I’ve ever owned and I like what it’s made out of. Anyway, I ramble. I have seen some of your suggestions for water filtration and would like to suggest another. I would suggest the Lifesaver bottle. Please let me know if you’ve heard of this and if you think it’s a good product. Thank you.

A: Thank you for the compliments on the gun belt (www.CovertBelt.com.) I wear mine every day and it works great for me. Regarding the water filter, I have never heard of this specific one so I’ll have to check it out and put it through some tests before I can offer a response to whether it’s a good product.

From Laura L: I may have found for you and your readers another option for concealed carry in shorts. I just ordered one and have not received it yet, to personally endorse. It’s called the Urban Carry Holster. I also want to applaud you for “Standing by” your original comments regarding “I stand by what I said. I think women are sweeter, kinder, and more selfless than us men.” You are truly a wise and insightful man.

A: Flattery works very well on me. I will definitely be forwarding your comments to my wife the next time she questions if we really need another gun or knife or flashlight. (Yes, we do Dear, because I am a wise man.)

From Larry B: For the record, Jason, I carry at 3 o’clock with shorts and a t-shirt (or polo shirt) frequently in the summer. I’ve been made exactly once in 15 years, and then by a friendly who already knew I carried. I carry a Glock 19 in a Crossbreed Supertuck, with the belt adjusted *tight*.

A: Another good suggestion for a holster to try out. Also, notice Larry’s comment about making your belt tight to hold the gun close to your body. If you don’t already have a quality gun belt to do this with, make sure and check out the video of the Escape & Evasion Gun Belt. www.CovertBelt.com.