This Week: Advice from a man who’s been in a lot of gunfights… What caliber of handgun I carry… Why you should get a storm door… And, Technical Surveillance Countermeasures.

This past Saturday, my wife spent all day at a church youth activity. I was home with the kids, which meant my day consisted of playing with blocks and watching far too many episodes of Curious George.

During the day, I decided to listen to one of the ProArms podcasts that Massad Ayoob does so I turned it on in the background. This particular podcast was about an hour long. In it, Massad interviewed a Police Lieutenant named Bob Stasch who works for the Chicago Police Department.

Needless to say, Chicago isn’t the safest city in the world and throughout his career there Lt. Stasch has been involved in 14 gunfights.

As I just mentioned, the interview was about an hour long and so in order for you to benefit without having to take an hour out of your day I’ve noted below what I believe are the most important things we can learn from a man who’s survived so many gunfights.

This is great advice because if you hesitate you obviously lose precious time in defending yourself. To ensure you don’t hesitate, it’s important to understand deadly force law so you know when you legally can and cannot defend yourself using deadly force. Also, training with your firearm as often as possible builds muscle memory and helps you react more quickly in a dangerous situation. 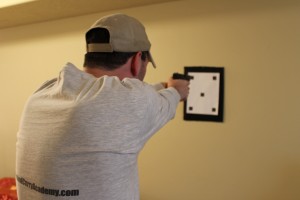 It was great to hear him say this and to see that he doesn’t have an ego or think he’s superman. He knows it’s always better to avoid conflict even if it means swallowing your pride.

Whether a criminal doesn’t go down because he’s wearing body armor, is on drugs, or has a strong will to live, it’s a good idea to practice head shots when you go to your local shooting range. If you practice on a 6-inch target, you’ll be much better prepared to defend yourself wherever you end up having to shoot a criminal to keep yourself alive. 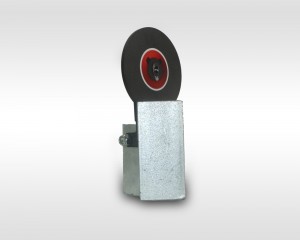 (6-inch steel targets by Grizzly Targets, which I use for training)

Lt. Stasch admitted that he’s not the world’s greatest shot and that he doesn’t care about being so. I liked this comment because I think a lot of folks get discouraged when they watch a professional shooter sponsored by a company like Glock shoot a superhuman score that makes the person look robotic.

You don’t have to spend 8 hours a day training with your gun, and you don’t have to be on the competition circuit in order to be a good shot. If you go to the range monthly (weekly if you can) and you use your time at the range wisely, you’ll be in a good position to shoot well if the time ever comes.

Lt. Stasch says he was either using his radio, or pushing someone or something out of the way with his support hand in all the others. This is a great reminder to often practice one-handed shooting drills with both your strong hand and your support hand. 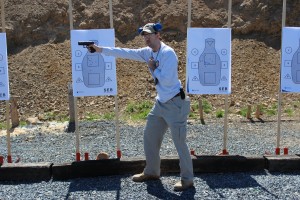 Yes, you should practice shooting from a distance, but spend a lot of time practicing close quarters drills. Make sure that at close distances you can draw and fire your first shot in two seconds or less.

From Ben W: I can’t remember if you have covered this before, so here’s my question. (And I am *not* trying in any way to start a “caliber war” here! 🙂 I am wondering which caliber of defensive ammo you found suits *you* best, and why.

I carry 9mm Speer Gold Dots in my home defense gun and my concealed carry gun. With advances in bullet technology 9mm hollow points will get the job done. Not too long ago, the FBI released a memo stating why departments should consider going back to 9mm based on improvements in bullet technology.

From Steve C: Jason – A good $ 300 storm door with polycarbonate glazing allows you to look out and talk with the “visitor”, and since it is always locked you have an extra barrier that gives you time to get the front door closed. The good storm door pays for itself in HVAC savings, and is a thick enough gauge that it cant be muscled through without creating a hell of a lot of noise to forewarn you and also trip a remote police alarm.

A: Great advice. A storm door will certainly slow someone down that’s trying to break into your home.

From William M: I just ordered a list of 37 items for an escape bag–is this an ebook I get right away or is it an item sent thru the mail? Thanks!

A: This is an ebook that you can immediately download. (You can get The Escape Bag Blueprint: 37 Items You Must Have to Survive a Crisis for FREE right here.)

From Tim C: Hi! A friend believes that her office is bugged – she works at a new public library in Alabama. Is there a device that can tell her if a bug is present? What to do? I receive your e-newsletters. Many thanks.

A: I have some good news and bad news. The bad news is that most of the “bug detectors” you can buy online for $50 or even $100 are pieces of junk that won’t do the job. What you really need to do is hire a TSCM (Technical Surveillance Countermeasures) company to do the sweep for you, but they’re not cheap.